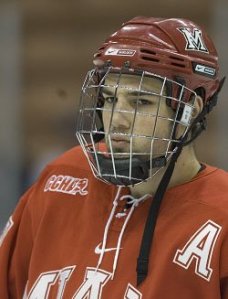 Hockey’s Future has put together a nice feture on the Chicago Blackhawks’ top twenty prospects, and Miami alum Nathan Davis cracked the list at number fifteen. Here’s their assessment of the Rocky River, Ohio native:

“Davis is similar to Billy Sweatt in many ways. Though he does not possess Sweatt’s speed, he is a sound skater who sees the ice well, thus making him dangerous in transition. Additionally, like Sweatt, Davis can play defense with the best of them. In fact, he was considered by many to be one of the top defensive forwards in college while at Miami. Davis’ quality two-way game makes him an ideal special teams player. Now that he has been signed by Chicago, Davis will likely see time in Rockford next season.”

To check out the rest of the Blackhawks’ top twenty prospects, click here.