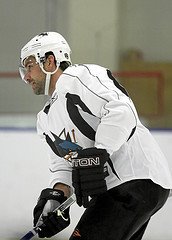 “Dan Boyle and Joe Pavelski were the best players on the ice. Boyle went through the entire team a couple times (no spin-o-rama required) and was really strong at the point on the power play, holding the puck in and controlling it.”

No surprise here, as we all know Boyle has been a standout defenseman in the NHL for the past several years.