← >Murphy Commits to Miami
>Musitelli Finds the Net in Debut → 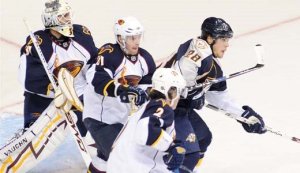 Things just keep getting better for Ryan Jones. He scored his first official preseason goal of the season in a 4-2 Nashville loss to the Atlanta Thrashers, although he had one goal and one assist in two rookie games against the Thrashers earlier in the week.

Ryan Jones made the score 3-2 with his first of the preseason (though he also added one goal in two rookie games earlier in the week). Mike Santorelli won the offensive zone faceoff back to Klein at the left point. Klein shuffled to the high center slot area and snapped a shot on net. Jones, set up at the top of goal crease, redirected the puck home with 5:10 remaining in the middle frame.

Jones in front of the net?? Really?! Who knew! The NHL.com game summary reports that Ryan was also selected as the game’s third star by the Nashville media.

Brandon Felder, over at HockeyBuzz is becoming my new best friend. Here are some post game quotes from Jonesy, from Felder’s column:

(Jones received the number three spot on Felder’s Five, based on his performance tonight)

3. Ryan Jones – Considering this was Jones 1st pre-season game ever I had to give the guy some love. Jones played his game and shook off the 1st period jitters by adding a goal in the 2nd period. He finished the night +1, had 3 shots on goal, and 3 hits.

Ryan Jones on his 1st pre-season experience: “The game was a lot faster than even the games a couple days ago so it took me a few minutes to realize that guys would be on you that much quicker. I was a little nervous.”

Jones on his deflection goal: “It was a great play. Mikey won the draw and Kleiner did a good job of getting the shot through. All I had to do was go to the net, which basically what I try to do all the time, and put a stick on all the pucks that come through and it went in.”

Jones will be in the lineup on Friday when the Predators travel to Columbus to take on my Blue Jackets. What a bittersweet moment it’ll be for me…Ryan Jones, playing against my favorite team and for a division rival.

From The City Paper:

ALONG CAME JONES: Forwards Ryan Jones and Patric Hornqvist both did a great job of establishing themselves in front of the net. Jones was able to redirect a shot by Klein past Atlanta goaltender Ondrej Pavelec.

“We played a possession game down low,” said Jones. “All around we did a pretty good job. We kept them off of the scoreboard which is pretty important when you are out there.

“I’ve done a decent job down low. There are still a few plays where I could have done a better job, but overall I think our line has done a great job of cycling the puck down low and playing that possession game.”

Jones knows there is no security for a prospect. He has played in two rookie games as well.

“I’m just trying not to stretch out of my game,” Jones said. “I don’t want to be somebody I’m not.”

← >Murphy Commits to Miami
>Musitelli Finds the Net in Debut →