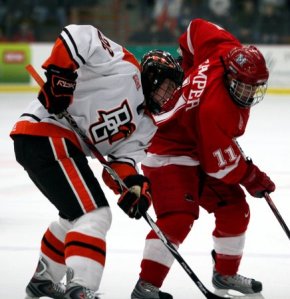 – After a sweep of Notre Dame this weekend, our RedHawks are getting some well deserved praise. College Hockey News has picked Miami as the Team of the Week.

Though it’s still early, Miami has proven a lot already — getting a close loss and tie at hostile Vermont, then going into Notre Dame this past weekend and sweeping. It was a complete weekend, with key scoring; strong defensive play from the vets, newcomers and forwards; and solid goaltending from the young goaltenders. As a result, Miami is the CHN Team of the Week.

The article also offers a nice perspective from Andy Miele. I encourage you to read the rest of it, at this link.

Carter Camper was a big hit last season with the likes of Dave Starman, Matt McConnell and Adam Zucker from CBS College Sports, who took turns touting the Rocky River, Ohio native on their Hobey Watch ballots. Of course, broadcasters have more than one reason to like Camper, as “Carter Camper” does tend to roll off the tongue a fair bit easier than, say, “Matti Kaaltiainen,” but when a guy is coming off a 41-point freshman season in which he was also a +21 for his team, you have to imagine a shot at the Hobey isn’t out of the question. Meanwhile, fellow RedHawk center Pat Cannone turned heads with a six-point effort against Ohio State in the second game of the season – the first such game at Miami in 21 years – and when a player can put up six points in one night, it’s certainly worth taking a look.

To read the rest of Olshansky’s column, as well as the rest of the article about Carter Camper (what I posted is only a short excerpt), click here.

Posted on October 29, 2008, in Carter Camper. Bookmark the permalink. Leave a comment.