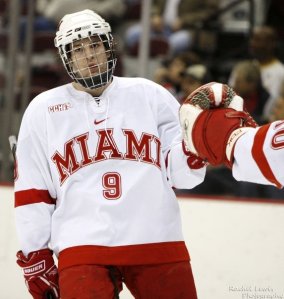 You could say it was a passing of the torch. In the post game press conference after Miami’s 4-3 overtime loss against Boston University, sat three people- RedHawks Head Coach Enrico Blasi, Captain Brian Kaufman, and Tommy Wingels. There could have been no better set up, no better stage to showcase what was the past, present, and future of the Miami captaincy, as the junior winger has been selected to lead the RedHawks’ as team captain in 2009-2010 and most likely, in 2010-2011 as well.

Wingels, a 6th round pick of the San Jose Sharks in 2008, has quickly risen to become one of the shining stars of a very young Miami hockey program and carries himself with the true “Brotherhood” mentality. Having finished the 08-09 campaign with 11 goals and 17 assists, the Wilmette, Illinois native realizes that the RedHawks’ may have been down on that chilly April night in D.C., but they weren’t out.

“It (a National Championship) is going to be our ultimate goal next year,” he said. “We feel like we have some unfinished business.”

Alternate captains for the 09-10 season have yet to be determined.

Posted on July 8, 2009, in Tommy Wingels. Bookmark the permalink. Leave a comment.