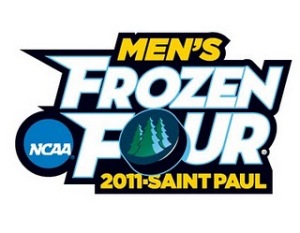 It’s official! The 2011 Mason Cup Champion Miami RedHawks have claimed a #1 seed in the NCAA tournament and will face #4 seed New Hampshire in the Northeast Regional in Manchester, N.H.

#2 seed Merrimack College and #3 seed Notre Dame round out the regional bracket which takes place Saturday and Sunday, March 26-27.

Miami (23-9-6) and New Hampshire (21-10-6) have faced each other four times over the past two years with Miami holding a slim 2-1-1 advantage against the Wildcats. And, in 2007, Miami earned its first ever NCAA tournament victory knocking off the #1 seeded ‘Cats 2-1. That game was also played in New England.

This season, Miami and New Hampshire split their series in early October by identical 6-3 scores with Miami winning Friday and UNH earning the split on Saturday. The second game saw the Wildcats break open a close game by scoring five second period goals against Connor Knapp who was not sharp early in the year.

Defensively, the Wildcats are led by junior Blake Kessel (5-21-26), the younger brother of Maple Leafs’ winger Phil Kessel and junior goaltender Matt Digirolamo who has played nearly every minute in net this year for UNH. Digirolamo sports an impressive .921 save percentage but a relatively high 2.49 goals against average. I’d compare him to Notre Dame’s Mike Johnson. A very beatable netminder. As a team, the Wildcats allow 2.51 goals per game while Miami is a bit more stout at just 2.2.

This will be a terrific first round match. Two high scoring teams who know each other well. Miami is riding a 13-game unbeaten streak and has won 7 in a row. The Wildcats stumbled a bit down the stretch going just 4-5-2 dropping their Hockey East semifinal matchup against Merrimack in Boston on Friday. Frankly, it’s because of UNH’s struggles that they slipped to a #4 seed which necessitated moving Boston College out of Manchester and moving Miami in to face the Wildcats in the first round.

This is a very winnable bracket for Miami but UNH will prove to be a difficult opponent. They are very talented up front and will be playing a virtual home game. If the RedHawks can find a way through the Wildcats, they would face the winner of the Merrimack/Notre Dame game, two inexperienced teams in tournament play. And, as for the Irish, a team Miami just defeated 6-2 on Friday afternoon.

If Miami were fortunate enough to advance to the Frozen Four, they would face the winner of the East Regional, either Yale, Union, Minnesota-Duluth or Air Force and would not have to face, presumably, either Boston College or North Dakota until the national championship game. But, that’s a long way away.

Posted on March 20, 2011, in Frozen Four and tagged Frozen Four. Bookmark the permalink. Leave a comment.