← RedHawks In the Playoffs
Update On Jones Contract Situation → 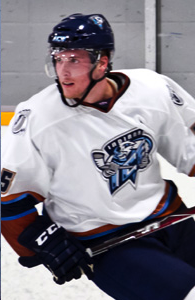 Blake Coleman, set to make his RedHawk debut this Fall, has been named the USHL Player of the Year, as well as Forward of the Year. Having spent the last season and a half with the Indiana Ice, he led the league with a total of 92 points, 38 of those being goals, in 59 regular season games. The release, which can be read in full here also says that Coleman’s plus-52 rating on record since the USHL became a Tier 1 league in 2002.

The Texan Coleman is ranked #198 on the list of North American skaters heading into this year’s NHL draft in June, which most likely translates into a late-round pick, if at all. The incoming crop of freshman looks to be impressive thus far and Coleman’s monster season with the Ice has only helped solidify his case as one of the most promising to wear a RedHawks sweater in recent years.

← RedHawks In the Playoffs
Update On Jones Contract Situation →