RedHawks Back in Action with Weekend Set at Western Michigan

KALAMAZOO, MI – After 5 weeks off from NCAA play, Miami gets back at it this weekend, and starts a demanding set of 8 weekends of NCHC play. From here on out, Miami doesn’t play a non-conference game unless they make it to the NCAA tournament. 16 games, 16 NCHC contests, with 1 bye week (1/31-2/1) and the all important conference seeding on the line in the mostly upside-down NCHC.

It’s not going to be an easy for the RedHawks. “It’s nice to have everybody back and healthy again,” Head Coach Enrico Blasi said. “With the exception of Blake Coleman, we’ll have everyone back in our lineup. It’s been a good little mini-camp before we play Western Michigan on Friday. I feel like we’re ready to go now.”

Miami did play the US National Team Development Program (USNTDP) on New Year’s Eve, and dropped that exhibition contest 4-2. Max Cook and Johnny Wingels picked up the goals in the game, Austin Czarnik assisted on each goal, and Jay Williams and Ryan McKay split in net. Williams allowed 2 goals on 15 shots and McKay picked up the loss by allowing the 3rd goal, and the US team scored an empty netter to seal the win. Miami was without Taylor Richart, Riley Barber (playing in the 2014 World Junior Championship in Sweden) and Blake Coleman – three main components of Miami’s roster to this point.

Heading into the weekend against the Broncos, Blasi had this to say about the team’s break, and was very complementary regarding their upcoming opponent. “At practice it has been great. The guys had a little bit of fun with [Barber] and we’ve had some good days off the ice where we have done some things together as a team and as a program and those things are always important. [The Broncos] are well coached and they play a good systematic game and they play hard. You’ll have to play your best to play with them and it’s been like that for the last 4 years. These guys understand how to play at a high level. Our rivalry over the last 4 years has been unbelievable – intense, physical games. Their building will be jammed. Their students will be there to give them a real high energy boost. Our conference is pretty good and Western poses a lot of issues. We’ve been preparing hard for a big time battle in our conference and we’ll be ready to go.”

As far as the Broncos go, they are led by Senior Shane Berschbach (a former Miami decommit), who has 8 goals and 15 assists on the year. Junior Frank Slubowski was the Broncos mainstay in net, but Sophomore Lukas Hafner was awarded the Jack Tompkins Trophy as the Great Lakes Invitational’s most valuable player over the holiday break. He sports an impressive 4-2 record, .947 save percentage and 1.26 GAA for a stat line, and has started taking playing time away from Slubowski. He has played in (and won) 3 of the last 4 games for Western, and is likely to see at least split time in net this weekend. 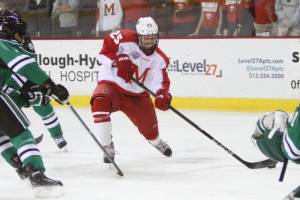 Blake Coleman has been a catalyst for MIami, but will miss this weekend’s play with an upper body injury. (Miami University Athletics)

Blasi reiterated the sentiment about the rest of the season. “There are 16 games left and we won’t look at the standings at all right now. There’s so much hockey left to play and so much that can happen. We’re going to have to play well. Are we where we need to be? Probably not, but are we going to work our tails off to get there? Absolutely.”

The second half test starts Friday and Saturday in Kalamazoo. Both games start at 7:05 PM. According to MURedHawks.com, “an All-Access broadcast will also be available for both contests.” Western Michigan also uses Neulion, so we’re hopeful that the feed will be picked up by the Miami All-Access team for the weekend.

If you’re in town for the weekend, hit us up! I’ll be in the house with a group of RedHawks faithful and you can find us on Twitter by heading to @MiamiHockeyBlog. Enjoy the games!

Posted on January 10, 2014, in Uncategorized. Bookmark the permalink. Leave a comment.