← Miami Cruises through Pool Play, will Play for All the Marbles
Frozen Faceoff — We have questions… →

It’s truly is the most wonderful time of the year!

With the NCAA basketball tournament starting in earnest today and NCAA hockey’s conference tournaments hitting full stride, this weekend is one of my most favorite sports weekends of the year.

Miami is unaccustomed to looking up in the standings, but they did this year.

And, in case you haven’t been paying attention, Miami is once again in the thick of it. But this time, the tables have been turned on the RedHawks. After a sub-par regular season that most certainly did not meet expectations, Miami decided to come together last weekend in St. Cloud upending

the Penrose Cup champions in a two-game weekend series sweep. Yet, Miami will not earn a berth to its ninth consecutive NCAA tournament without winning two more games this weekend.

A team that as recently as February 14-15 defeated Miami 3-2 in a game UND led 3-0 and then handed the RedHawks  a 9-2 whipping the likes of which this program hadn’t seen since the 1990s. The teams split their series in Oxford way back in October with North Dakota winning 4-2 and then Miami dishing out a 6-2 whipping of their own a night later.

However, the lost weekend in Grand Forks perhaps began to ignite a little spark in the RedHawks.

Buoyed by the return of Blake Coleman, Miami would begin to play a little better. Splits in two of the next three series marked by incrementally better play defensively and in net, set Miami up with a chance to go into St. Cloud and knock off the Huskies. Miami had split both regular season series with SCSU so last weekend’s outcome wasn’t all that surprising.

Miami is still not there yet. 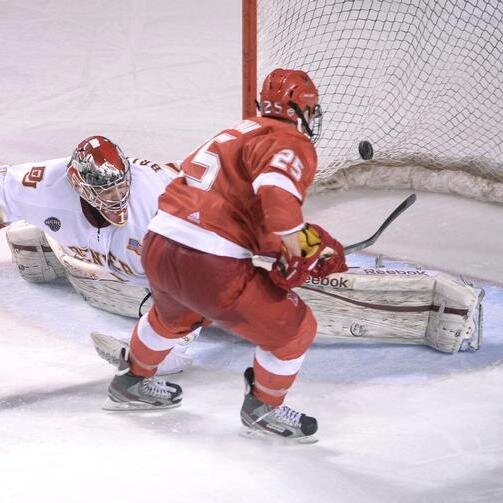 Blake Coleman’s return from injury has given the RedHawks a spark.

If they have any dreams of winning the NCHC conference tournament and advancing to the NCAA tournament, they will have to find a way to shore up defensive lapses that have plagued the team all season. Dennis Green’s famous quote, “they are what we thought they were” most definitely applies here. As much as we’d like to think this team is better than it really is, the fact is they have played as poor defensively as a club as any Miami team in recent memory, and despite having all kinds of offensive talent, it still might not be enough. What’s clear is they are not going to win too many 2-1 games. But, if the offense can get to four, Miami will have a real chance to win two games this weekend and carry the dream forward.

That said, Miami will have to get past a team that has rounded into arguably the best team in the NCHC and one with a significant home-ice advantage tomorrow night in North Dakota. Gang Green (I don’t know what to call them) has one of the best traveling fan bases in all of college sports and you can figure they will have an overwhelming number of supporters all weekend long. But, rooting for the underdog, and against North Dakota, is always chic. I expect those in attendance from UMD, UMTC, SCSU and others to pull for the RedHawks and maybe just give them a little boost. The crowd will most certainly get behind Miami should they take the lead or keep it close.

And, I do believe this will be a close game.

Coleman’s return gives Miami four complete lines and gives head coach Enrico Blasi the abilty to split up snipers Riley Barber and Austin Czarnik pairing either Coleman or Sean Kuraly with them. Then with Alex Gacek, Alex Wideman and Cody Murphy set to offer scoring ability throughout the lineup, it does make Miami more difficult to defend. There is an awful lot of offensive talent on this team which simply makes this season that more perplexing. One theory I have, and that I’ll get into in another piece, is that Miami was unprepared for the toll that the new travel schedule would take on the team.

Anyway, this weekend rests on the shoulders of the offense. But, if Miami can get decent contributions from the blueline (in terms of clearing rebounds, playing without turnovers and making smart plays up the ice) and if Ryan McKay can be in top form, there’s reason to believe Miami can win two games this weekend and move on.

At least that’s what I’m telling myself.

← Miami Cruises through Pool Play, will Play for All the Marbles
Frozen Faceoff — We have questions… →