For the stats geek of any team and in any sport, it’s fun to watch players vault themselves onto all-time team leaderboards

With the success of the Miami hockey program the past decade, many skaters and goalies have muscled up the ranks in numerous categories.

The Blog of Brotherhood takes a look at some team and individual numbers to watch 2015-16.

1. Miami’s win total – According to its media guides, Miami has 679 all-time wins and needs 21 to reach 700. The RedHawks have recorded at least that many victories in nine of their last 10 seasons. Coach Enrico Blasi has 351 of those wins, and he has coached the team for 16 of its 37 seasons. 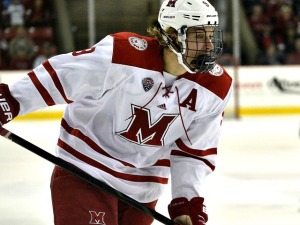 He is already in a six-way tie for fifth all-time at Miami with 11 for his career, and he needs just two to move into third on the career leaderboard. Ryan Jones owns to RedHawks’ mark with 21.

3. Jay Williams’ wins – With a breakout 19-win season, Williams is now tied for sixth in the school record book with 36 victories. He needs to just five to crack the top five and is 24 off the Miami mark, held by 2003 graduate David Burleigh (60).

4. Coach Enrico Blasi’s win total – This is now one to watch each year, as Blasi is already 30th in Division I history with 351 wins. Remember that Blasi took over the job at age 27 and won’t turn 44 until next February. With 10 of the school’s 12 NCAA Tournament appearances occurring on his watch, including its only two Frozen Four berths, and nine trips to the NCAAs in the last 10 years, Blasi should remain in Oxford for a long time.

A number of coaches immediately ahead of Blasi are still active, so moving up the ranks the next couple of seasons will be difficult, but he has a legitimate shot at 400 by the end of 2016-17, which is a pretty big milestone in college hockey, especially since teams play just 35-40 games per campaign on average. By the way, Boston College’s Jerry York holds the NCAA record with 984 wins.

5. Anthony Louis points – Miami fans have been spoiled over the past five years with Andy Miele, Carter Camper and Austin Czarnik all posting over 150 career points and shooting into the top 10. 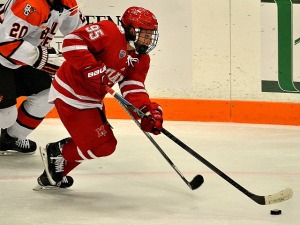 This is more of a 20-16-17 tracker alert, as Louis will be a junior this fall, but he already has 21 goals and 40 assists for 61 points, and with 36 points last season, he could become the 51st member of the 100-point club. Barring injury and other factors, he could move pretty far up the 100-point club list next season.

6. Matthew Caito defenseman points and assists – The senior has slowly been moving up the ranks, and he is just four out of the top 10 in points by blueliners. He is averaging 20 points a season, and 20 more would give him a career total of 81, placing him eighth in school history for defensemen. His 49 assists have him one out of the top 10 behind Cameron Schilling. If he hits his average of 16 he would also end his career eighth that category among defensemen with 65.

7. McKay/Williams shutouts – Jay Williams tied a school record with five shutouts in 2014-15, giving him seven for his career, and he is still one behind Ryan McKay for the active lead. McKay has eight and Williams is at seven, ranking fourth and tied for fifth in school history, respectively. The record is held by Connor Knapp (13), and Cody Reichard and Burleigh are tied with 12, so both would have much work to do to move up, but they have had exemplary careers in Oxford and either could challenge the record, especially if one takes over the starting reins exclusively.

8. More Jay and McKay – Speaking of goalies, despite an off-year, McKay is second in the qualitative career save percentage category at .920. Williams moved into the top 10 and is sitting at .911, good enough for sixth all-time. Jeff Zatkoff is the RedHawks’ leader at .927.

9. Even more Jay and McKay – And then there’s goals-against average. Williams moved ahead of McKay and into fourth place in this qualitative stat at 2.29 vs. 2.31. Williams has the fourth-best mark in Miami history, McKay is fifth. Connor Knapp holds the school GAA mark at 1.94, and that would take a major effort to topple, even if one started almost every game and went well below 2.00 this season.

10. Caito’s games-played total – Among the seniors at Miami, Caito is the clear leader in games played in his three seasons with 119, having missed just one contest (the 2014-15 opener vs. Bowling Green…Miami lost that game…coincidence?). He needs to play 39 games this season to tie for ninth all-time, and his advancement in this category depends on his continued health and earning the right to dress (a near given to this point with him) as well as the team’s success. Only five Miamians have played 160 career games, but he has a shot to join that exclusive club.