OXFORD, Ohio – For the second straight game, Miami held a late lead but was unable to close out a win.

At least this time the RedHawks salvaged a tie.

Miami and No. 6 Nebraska-Omaha skated to a 3-3 tie at Cady Arena on Friday, as the Mavericks’ Austin Ortega scored the decisive goal with 10:10 remaining to force overtime and the eventual stalemate.

RedHawks sophomore defenseman Louie Belpedio scored early in the second overtime which earned Miami a second point out of a possible three in the NCHC standings.

In its last game, MU squandered a 3-2 lead in the closing minutes and ended up collecting zero points after allowing the winning goal in overtime at North Dakota.

The game was scoreless after one period, but five of the game’s six goals were netted in the middle frame.

A rebound shot by Fredrik Olofsson opened the scoring 47 seconds into the second stanza, giving the Mavericks the lead.

Miami freshman forward Josh Melnick centered a pass from behind the boards to junior forward Anthony Louis, who beat goalie Kirk Thompson 3:22 into the period.

Tyler Vesel put UNO ahead shorthanded just two minutes later, and RedHawks senior defenseman Matthew Caito wired a shot through traffic from the blue line on the same Miami power play 27 seconds after the Mavericks’ go-ahead goal to tie it at two. 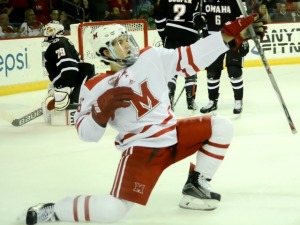 RedHawks freshman forward Jack Roslovic slammed home a bad-angle shot from the side of the net to give Miami its only lead of the game, 3-2 at the end of a power play with 2:35 remaining in the middle period.

Miami did end up with several excellent scoring chances in overtime, but Thompson shut the door each time.

Roslovic ended up with a goal and an assist, his third straight two-point game, and freshman forward Kiefer Sherwood picked up a pair of helpers. Melnick has also recorded points in three consecutive contests (2-2-4).

The RedHawks are in fourth place in the NCHC with eight points but has logged more conference games than any other team in the league (7). Miami did extend its home unbeaten streak to five games (3-0-2).

The series finale is at 7:05 p.m. on Saturday as the RedHawks play their final home game of 2015.