OXFORD, Ohio – Thanks to Anthony Louis, there was no free hockey at Cady Arena on Saturday.

The junior forward ripped a one-timer into the bottom corner of the net with two seconds left in regulation to lift Miami to a 2-1 win over Bowling Green. 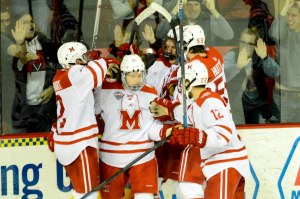 Senior Jay Williams stopped 28 shots to earn the win, which was just the second for the RedHawks in 11 games.

Kevin Dufour opened the scoring for the Falcons, as his shot from the top of the faceoff circle snuck under Williams’ arm 5:55 into the first period.

Off a steal by Louis, Miami senior Alex Gacek tied it with 4:15 left in the middle stanza, stuffing a loose puck home from the side of the net.

It remained 1-1 until the closing seconds of the third period, when Gacek fed Louis from the side of the net back to Louis, who ripped it just inside the post on the glove side for the decisive score.

That meant no overtime for MU, which had seen five of its first 20 games go to an extra session.

Louis and Gacek both finished with a goal and an assist.

Louis has now recorded five points in his last five games, and Gacek scored his second goal in four contests.

Williams picked up his second victory, improving to 2-2-1 and 3-0 in his career vs. Bowling Green.

The RedHawks resume league play next weekend, as they travel to Nebraska-Omaha. They play at 8:37 p.m. on Friday and 8:07 p.m. on Saturday.