Three weeks ago, Miami was a one-line team, and the star of that forward combination was even fading.

Looking at the RedHawks’ past three games, including Friday’s 3-1 win over Denver at Cady Arena, it’s hard to rank their lines, as all are contributing in that all-important goal column.

And when they aren’t, they’re at least creating scoring chances or playing responsibly on defense. 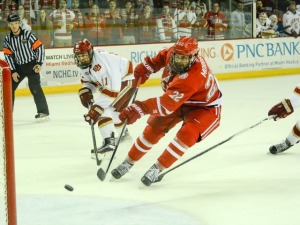 Forwards Kevin Morris and Anthony Louis have been major reasons for Miami’s rejuvenated offense. Yes, they accounted for three points on Friday, including two of the team’s three goals, but as usual with hockey, there’s much more beyond the surface.

Morris’ pass to Roslovic for the eventual game-winner was as impressive as the goal itself, and his two-way play has made him one of the best forwards on the team in recent weeks.

And yes, Roslovic was better as well, as he seemed more involved than he has been in the past few games, which is scary for opponents, especially with so many other forwards playing at a high level that opponents need to account for defensively.

Also, the fourth line didn’t account for any goals on Friday, but that Crash Cousins-plus-Ryan-Siroky unit played well in its grinding role after Conor Lemirande recorded a hat trick last Saturday.

Not to discount the defense corps, with the exception of a turnover-turned-goal, and the goaltending in this game in the least. But most that follow this team knew those areas weren’t going to be an issue this season.

Need a stat to back up blueliner play: Senior Taylor Richart blocked eight shots on Friday.

– Justin Greenberg made an incredibly selfless play on the PK in the first period, throwing his body at the puck near his defensive blue line to get the puck down the ice when Miami really needed a clear. Greenberg’s play hasn’t been mentioned above, but holy cow, talk about a candidate for most-improved player at this season’s awards banquet.

– Another player not mentioned to this point: Alex Gacek. It’s mind blowing that someone his size is able to lay out players twice his size, which he did multiple times on Friday. Yet another senior that is playing some of his best hockey in his final stretch run.

– It was Week 3 in GoalieGate for the RedHawks. Freshman Evan McCarthy was again the backup, as senior Ryan McKay was scratched. The reason for his suspension, or whatever we’re calling it, has been discussed ad nauseum, and BoB has no idea what the aftermath has been between McKay and the coaching staff, but here’s hoping it ends soon. McKay has been an exemplary player for 3½ years, and it’s tough to see this happen to a senior during his final stretch run. That said, even when McKay is reinstated, Jay Williams has been a wall in his absence, posting a .947 save percentage, so it may be tough for him to get into games with an .867 mark since the North Dakota series.

– As far as who outplayed whom between Denver and Miami, the first period was pretty even. MU generated a scoring chance in the opening seconds, but there were few of those in the opening stanza and both teams buried theirs. The RedHawks dominated the second period, and Denver was very strong in the final stanza, although Miami played well also. Very well-played game, the type we’ll likely see more of in the second half of the NCHC season.

– Well, the students were back for the first time since, well, before Thanksgiving, and it seemed to be an enthusiastic crowd. But the attendance for this game was still south of 3,000, which was disappointing, especially considering the magnitude and quality of this game.

And unfortunately for some fans that meant the return to non-rock for the entire game and not just the first and third periods plus most of the second. Apparently there was no reason to stop at bringing back four-decades-old Village Idiots steamer YMCA and band favorite from the same Musak era Sweet Caroline – a pro-Boston fossil, which…hey wait…doesn’t Miami dislike Boston after all of those BC and BU losses in the NCAAs? Fortunately we also added in 1950s great “Shout” to its almost exclusively dance club repertoire, as opposed to the rock selections every other rink in North America touts. Hey, let’s not stop there: Let’s break out some Irving Berlin and then work ourselves back to Beethoven and eventually the Baroque era for some Bach and Vivaldi. Worth repeating: Having been to hockey games in over a dozen states and now six Canadian provinces, beautiful Cady Arena has easily the worst music selections of any rink I’ve ever attended. Not even close.

– Sean Kuraly took two minors on the same shift at the end of the second period. The first one could’ve been debated. The second one for charging was un-captain-like. He has played so much better in recent weeks but he can’t let his emotions get the better of him.

– Were Taylor Richart’s eight blocks mentioned above? They were, but let’s mention them again.

FORWARDS: A-. Two goals plus the empty netter, but still a great effort against a hot team with two solid goalies. Lots of standouts in this one: Morris for one, but also Roslovic, Louis, Greenberg – liked Zach LaValle in this one too as he continues to gain confidence.

DEFENSEMEN: B. Denver is a bit of a one-line team, and this corps was pretty good for the most part. Grant Hutton did turn the puck over for the Pioneers’ first goal, but he came back and played well after that. Amazing to see how much better Scott Dornbrock has gotten from Game 1 to Game 24. Richart had eight blocks. In case that wasn’t mentioned above.

GOALTENDING: A. To say Williams stole this game might be an overstatement, but Miami certainly doesn’t win without his effort. He looked a little vulnerable early, which is not uncommon with Williams, but he was a rock the final 40 minutes. A great pass and backhand resulted in Denver’s lone goal, and Williams made two unbelievable saves in the third period to preserve the 2-1 lead. Williams has allowed just six goals in his four-game winning streak and has a goals-against average of 1.33 since taking over in net.

LINEUP CHANGES: None. As mentioned previously, Coach Enrico Blasi typically likes to stick with a starting 18 by this point in the season, and it looks like this is the group. Hard to blame him, as it would be difficult to pick a weak link, but it’s always tough to see quality players sit in the stands, like Colin Sullivan and Devin Loe. The goaltending situation has been discussed at length, and it’s unclear if/when McKay will be re-instated.