OXFORD, Ohio – Despite dominating in the shot column, firing 36 for the game including nearly half in the first period, No. 3 St. Cloud State was much better in the category that counts: Hitting the net.

The Huskies pounded the RedHawks, 5-1 at Cady Arena on Friday, netting four straight goals after Miami tied the score at one in the opening seconds of the second period.

The first frame was played almost exclusively in the SCSU end, as Miami led, 17-3 in shots heading into the final minutes.

But St. Cloud State (23-5-1) put the final three shots on goal, including a wicked backhander by Ethan Prow that snuck just under the crossbar with 39 seconds left in that stanza. 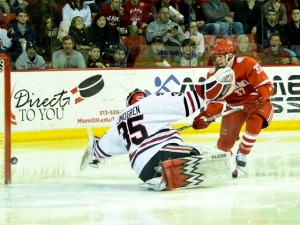 The RedHawks (10-13-3) tied it 15 seconds into the second period when freshman forward Josh Melnick batted home a rebound from a bad angle off the initial shot by senior forward Alex Gacek.

The Huskies took the lead for good when David Morley went in alone and backhanded one over the pads of senior goalie Jay Williams with 8:25 left in the middle stanza.

Less than three minutes later, Judd Peterson made it 3-1 when he pitchforked one past Williams from the side of the net off a 3-on-2.

Blake Winiecki tapped home a back door pass from Ryan Papa with 13:50 left in regulation, and Patrick Russell scored from his forehand on a 2-on-1 with 4:07 to play to cap off the scoring.

Melnick, who had his five-game point streak snapped last Saturday, started a new one with his goal. Gacek now has five points in six games.

The RedHawks are now 0-3 vs. SCSU this season and have been outscored by the Huskies, 11-1.

The teams wrap up their weekend series at 7 p.m. tonight at Cady Arena.