Analysis: No. 4 seed paramount for Miami

Is it too early to schedule watch?

Especially since we’re in the online world, the answer is a definite ‘no’.

Besides, there are only five games left in the regular season and all of them will be important for Miami, which beat Western Michigan, 4-1 at Lawson Ice Arena in Kalamazoo on Friday.

Thanks to that win, the RedHawks are currently in a three-way tie for fourth with Nebraska-Omaha and Minnesota-Duluth — both of whom lost on Friday — and that No. 4 spot is paramount if Miami wants to qualify for its 10th NCAA Tournament in 11 years.

As opposed to missing it for the second time in three seasons.

Here’s why this race is so important…

North Dakota and St. Cloud have run away with the top two spots. The RedHawks can’t even mathematically catch either team.

And Denver is a win away from securing a top-three spot, so the 1-3 seeds are off the table for Miami, unless it wins out and the Pioneers lose out. Which is not realistic.

That leaves the fourth spot as the last remaining one for home-ice advantage in the first round of the NCHC Tournament.

To round out the field, Western Michigan – especially after the RedHawks’ win on Friday – and Colorado College are virtually locked into the bottom two spots.

Meaning Miami will battle UMD and UNO for the four, five and six seeds.

Six plays the third-place finisher between UND, St. Cloud and Denver on the road. No thanks.

Five travels to the winner of this three-team cluster. In other words, it plays the hottest team of these three on the road. Again, nah.

In the scenario in which the RedHawks finish fifth or sixth, they will likely not have the wins necessary to keep an at-large possibility alive, which is why the next 15 days are so important.

UMD is at North Dakota again on Saturday after losing to UND in overtime on Friday, then it travels to second-place St. Cloud State for a pair of games next week before capping its regular season by hosting Miami.

UNO hosts St. Cloud on Saturday after falling to SCSU, 4-1 on Friday. The Mavericks wrap up their regular season with two against North Dakota at home and a pair at Denver.

Miami is at seventh-place WMU for one more on Saturday, hosts last-place Colorado College next week and finishes with a series at Minnesota-Duluth. Those opponents are a combined 24-54-9.

And if the RedHawks can’t put up a good showing in this stretch run, they don’t deserve NCAA consideration anyway.

Winning three of its final five would be just OK for Miami and would probably hurt its PairWise. Taking four would be preferable, and running the table would be ideal.

A losing record in this span would be devastating and would likely result in a road trip for a best-of-3 and then having to at minimum advance to Minneapolis for a shot at an NCAA berth.

– Anthony Louis scored his eighth and ninth goals of the season on Friday. We’ve mentioned his second-half surges before but haven’t thoroughly evaluated. 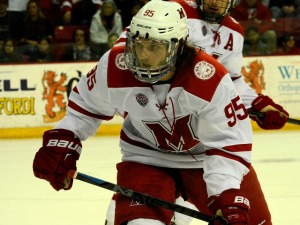 This is Louis’ third season with Miami, and he has 10 goals in 52 games in October, November and December and 20 in 55 contests in January and beyond.

And he has been clutch in the postseason, recording 13 points in 11 games in the NCHC and NCAA Tournaments, including six goals.

– This was the 29th game of Miami’s season and the first time the RedHawks have scored multiple goals in the first period. They had just 12 markers in the first 28 opening frames this season. 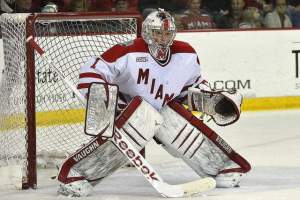 – Jay Williams stopped 27 of 28 shots to earn the win in this game and has been a rock since taking over following GoalieGate. Williams is 7-2 with a 2.11 goals-against average and a .917 save percentage in the nine-plus games since, and that’s with two five-goal games, with both featuring multiple tallies he had zero chance on.

– Jack Roslovic and Josh Melnick combined for just one assist on Friday but were still integral to the team’s scoring. Roslovic would’ve gotten third assists for two of the goals, and Melnick’s helper was the direct result of him stealing a puck at center ice and lifting it ahead to Louis, who did his thing to make it 1-0. Roslovic also just missed a goal at the end of the second period, so he’s still making offensive contributions, even if they aren’t showing up on the scoresheet.