OXFORD, Ohio – Alex Gacek finished his first season of junior hockey with 33 goals in 40 games and won a league championship.

He had also been selected to represent the U.S. in the prestigious Five Nations Tournament prior to the start of that 2009-10 campaign.

But in the summer of 2010, at age 17, Gacek suffered a full patellar tear, ripping the ligament that connects the kneecap to the tibia completely off the bone.

Two years later, Gacek limped into Oxford a shell of that standout player.

But nearly 3 1/2 years later, he has become an all-around force, scoring and setting up goals, killing penalties, blowing past would-be defenders and laying out anyone that gets in his way.

“That really did a number on my confidence more than my skill,” Gacek said. “Coming here, these guys gave me a shot. I’ve worked with some great people, and they’ve really helped my confidence pull a 180.”

Gacek hails from Dracut, a Massachusetts town north of Lowell near the New Hampshire border.

As a child, he told his parents while watching a Bruins game that he wanted to learn how to skate and play hockey.

With pond hockey a regional institution in the area, Gacek’s father, Mark, built an outdoor rink for the family to enjoy in the winter.

“I will never forget some of the memories of being out there – late nights, early mornings – how much my parents and my sister have given to me.”

When he reached juniors age, Gacek was fortunate enough to join New Hampshire, a powerhouse that has won seven titles in the Eastern Junior Hockey League. The team was also within driving distance, so unlike many hockey players of that age, he did not have to move.

“It was a team very much like this team: Very tight-knit, we wanted each other to do well no matter what the circumstances were, and we won a championship,” Gacek said.

But that summer while working out, Gacek severely injured his knee. He tried to come back the following season but was ineffective.

He was rushed back into action, which actually delayed the overall recovery process.

Alex Gacek squares off while playing for Youngstown in 2011-12 (photo by Cathy Lachmann).

Gacek still played in 41 USHL games in 2010-11 but he did not score a single goal and finished with just eight assists and a minus-18 rating.

Even after racking up 32 points in 57 games with USHL Youngstown in 2011-12, he was not the same player he was previously heading into his freshman season in Oxford.

A New Englander choosing Miami is somewhat of a rarity, since a large number of the Division I programs are in the northeast.

Gacek said most people growing up in his area wanted to play for Boston College or Boston University, but neither made an impression on him.

“I guess I was an oddball – I didn’t really know where I wanted to go,” Gacek said. “A scout and I started talking more and more, and I did some homework, but what really sold me was the concept of The Brotherhood. I’m a really big family guy and obviously this program prides itself on family, so it was an easy fit.”

One player Gacek already knew when he moved onto campus was senior goalie Jay Williams, whom he had befriended in juniors. 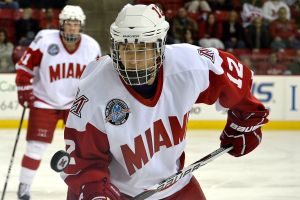 Alex Gacek as a freshman (photo by Cathy Lachmann).

“I remember when we first got here, he had had a rough junior experience as well, and that was something we could bond over,” said Williams, who never was able to start consistently in the USHL. “But as soon as he got his confidence and kind of got his footing, he was able to get comfortable with the guys in the room and develop that trust and that bond. He’s not always necessarily on the stat sheet but the contributions he makes, night in and night out – penalty killing, defensive zone, even just generating offense, getting in on the forecheck and stuff – it’s invaluable to this team, and he’s been a big part of the success that we’ve had for four years.

“He’s one of my best friends in the whole world. I knew him when he first committed – before I had committed – and we were roommates together freshman year. He’s real quiet at first, comes across a little shy, but once he gets comfortable and opens up, he’s awesome.”

Just four games into his RedHawks career, Gacek scored his first goal at Michigan, tying the score at two early in the third period and sparking a three-goal outburst in the final frame as Miami won, 4-3. 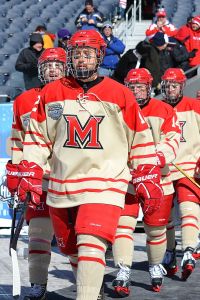 Overall, Gacek was not a major points producer as a freshman or sophomore, going 3-4-7 both seasons in 73 games.

But junior year, Gacek turned into a complete player. He scored five goals, including two in a critical late league game vs. Denver, and tallied nine assists.

His defense also was noticeably improved, as he became a dependable penalty killer and solid shutdown forward.

That surge in all aspects of play has continued in 2015-16. Gacek already has five goals and 10 assists for a career-best 15 points, and he leads the team by six in plus-minus with a rating of plus-11.

Alex Gacek as a sophomore (photo by Cathy Lachmann).

And he seems to have saved his best hockey for his final stretch run. Gacek has six points in his last 10 games.

“The knock on me prior to coming in was my defense,” Gacek said. “I really took that to heart, and I really bore down and focused on it, and I’m happy with my defensive game. I really enjoyed PK-ing now – our PK this year is outstanding, and thanks to coach (Brent) Brekke and coach (Enrico) Blasi, we owe them all the credit for sure.”

Gacek is one of the key penalty killing forwards on a unit that is second in all of Division I only to Yale at 92.4 percent.

“He’s the ultimate competitor, a warrior, he sacrifices his body – you see him blocking shots,” Williams said. “Plus, the speed he has, he’s able to put pressure on them and still track back and get back without getting out of position, sometimes force them into errant passes. Luckily, we’ve been pretty good on the PK this year and his is the first name on the list when we have a big penalty to kill, it’s Gace.”

In his four seasons, Gacek has been in the lineup for 143 of 149 games, missing just one since his freshman year and dressing in 92 straight contests.

“You guys can see it from the stands, he’s a top guy on this team,” Kuraly said. “Without him, we lose a lot up front, and in the locker room he’s a leader.”

He has 16 goals and 27 assists for 43 points and has been assessed just 42 penalty minutes. Gacek also has a career plus-11 rating.

“Coming here I obviously wasn’t a perfect player, so the guys here at Miami – the coaches in particular – have really helped me perfect my 200-foot game,” Gacek said. “Obviously I still have a lot of work to do, but from the time I came onto campus to now has been a great improvement.”

Throughout his career, NHL-caliber speed has been a trait Gacek has prided himself on. All four seasons in Oxford he has been one of the fastest skaters on the team.

“Those guys that are playing first line, he creates space for them and sometimes he can be a spark for us,” Kuraly said. “When guys aren’t feeling it he’s the guy that gets us going a lot of times.” 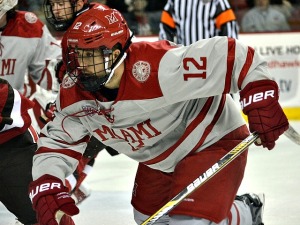 Alex Gacek as a junior (photo by Cathy Lachmann).

Despite being 5-feet-8, another attribute of Gacek’s is his hitting ability. Giving 20 or more pounds to most players in college hockey, he has taken on countless bigger players and often sends them flying.

“He’s a really strong kid – it’s really not a surprise to us,” Kuraly said. “He can lift just as much weight as anybody in the weight room. It’s a combination of speed and power, and he’s got both.”

Gacek weighs 180 pounds, which is impressive given his height.

“He’s a freak, he’s an animal,” Williams said. “You see him without his shirt on in the weight room, he’s just thick and he’s strong and he’s tough. Nicest kid in the world, best kid in the world but when it’s time to go, he’s got a mean streak to him and he’s not afraid of anyone or anything.”

Said Gacek: “I guess I’ve kind of got a mean streak in me – I’ve had it since I was little. My father said the bigger they are the harder they fall, so I kind of put all of my effort into it and try to separate the man from the puck is really my main goal whether they fall or not. I guess moreso they’re falling than not.”

Gacek would like to continue playing hockey after this season but ultimately wants to get his Masters degree in the business field after graduating this spring. He has a 3.43 grade-point average as a sports leadership and management.

He is interested in coaching when his playing days are over, and he said he has already picked a couple of coaches’ brains on the subject.

“He’s a tremendous kid, tremendous work ethic,” Williams said. “Obviously you can see the relentless mindset. Whether he continues to play or whatever he may do he’s going to be a successful person.”

Alex Gacek as a senior (photo by Cathy Lachmann).

But in the meantime, he is excited about the final weeks of his collegiate career, which will hopefully culminate in an NCAA Tournament berth for the third time in his four seasons.

“I really can’t thank everyone that’s part of this program enough,” Gacek said. “The Brotherhood is really something special. Definitely some of my favorite memories have been here, both on and off the ice. I owe this program to becoming who I am today. Just the growth and the life lessons that I’ve learned here have really helped me mature. I can’t believe my time here is coming to an end – it’s pretty bittersweet, but I really love this program.”