Miami is almost certainly one loss away from having its season end.

The RedHawks saw a two-goal lead vanish, as they surrendered three unanswered third-period goals in a 5-4 loss at Minnesota-Duluth on Friday in the first game of a best-of-3 series.

UMD (16-14-5) opened the scoring when Austyn Young tipped home a blueline wrister by Cal Decowski just 4:34 into the game.

The RedHawks went ahead, 2-1 when a Bulldogs defensive zone pass hit the skate of sophomore forward Conor Lemirande and slid to freshman forward Ryan Siroky, who whipped in the off-balance shot 4:11 into the middle stanza.

UMD tied it again on a blueline shot by Adam Welinski on the power play with 10:01 to play in that frame.

But Miami regained the lead just 18 seconds later, as senior forward Alex Gacek and junior forward Anthony Louis played give and go, with Gacek centering a pass to Louis, who skated in and backhanded one past Bulldogs goalie Kasimir Kaskisuo.

The RedHawks went ahead two just three minutes later, as a blast by sophomore defenseman Louie Belpedio found twine to make it 4-2 after two periods.

Unfortunately for Miami, there were still 20 minutes left.

Adam Johnson cut the lead to one when he drove the net 2-on-2 and beat senior goalie Jay Williams 4:54 into that stanza.

With 8:48 left in regulation, Neal Pionk tied it on a power play rip from the blue line.

The game winner came from Carson Soucy, just his second marker of the season, as he was the trailer on a 2-on-2 and shot the puck in from the slot.

Ten of the RedHawks’ skaters recorded a point, with Louis recording a goal and an assist for a team-best two points. 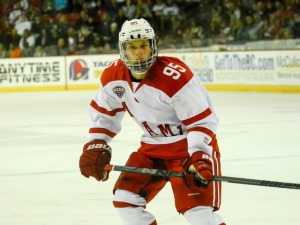 At this point, the only way Miami could earn an NCAA Tournament berth without winning the NCHC Tournament would be if it advanced to the title game and lost, thus giving the RedHawks a requisite .500 record, and everything went right for them in the PairWise rankings, which would be an extreme longshot.

The RedHawks are currently tied for 23rd and would need to improve to 14th or better to have a legitimate shot at an at-large bid.