Part I: 14 freshmen on Miami roster

Meaning over half of the RedHawks expected to hit the ice this fall will be freshmen.

Of the other 13, seven are sophomores-to-be, three will be juniors and three enter their senior seasons.

Part I of this two-part series will focus on Miami’s position-by-position breakdown for the upcoming season, while the latter installment will introduce everyone to the newest crop of RedHawks.

ANALYSIS: Yes, Miami took some major hits in this department, but it’s the most stable of the three facets. The RedHawks’ top four scorers all return (Louis and Sherwood, 11 goals; Roslovic, 10 goals; Melnick, nine goals). The toughest thing to replace from this group will be the leadership – Kuraly was team captain and Morris was an alternate – and the penalty killing ability. Morris, Kuraly and Gacek were all studs on the PK. Last season’s freshman class was impressive, especially the second half of the year, and will be relied on heavily in 2016-17. Even if all of the returning skaters dress, that leaves four openings for incoming freshmen, so at least one-third of the forwards will be rookies every night this fall.

ANALYSIS: Caito has been one of the best blueliners to play for Miami in recent years, and Richart and Joyaux were solid shut-down D-men for four years. The RedHawks were so deep here last season that Sullivan had trouble getting into the lineup despite playing very well just about every time he dressed. Like the forward corps, at least one-third of this group will be freshmen this season with only four blueliners returning. The good news is that this coaching staff has always brought in solid skaters on the back end that are game-ready as soon they come to Oxford. Hutton was the most recent example last season. If Belpedio takes another step forward he could be the top D-man in the conference. He is the lone returning alternate captain from 2015-16 and could wear the ‘C’ this fall. 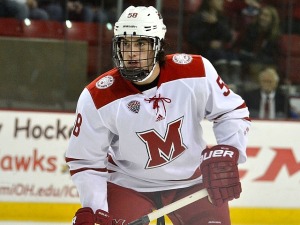 ANALYSIS: The Zatkoff effect continues. Jeff Zatkoff left after his junior year, leaving Miami with two freshmen in net for 2008-09, and eight seasons later the cycle repeats. Williams and McKay both had outstanding careers with the RedHawks, and the bar is high for the newcomers. McCarthy played the final minutes of one game last season, as he enters 2016-17 the most game-tested netminder on the team, having logged 9:39 between the pipes. Like with the blueline, Miami’s coaches continue to bring in excellent goalies. Masters was a late addition and gives the team four goaltenders on the roster, which is a bit of a rarity.

BOTTOM LINE: Scoring was a major issue for Miami last season, and while Roslovic was a stud early in the season, the rest of the freshman class caught up after the break, providing optimism in that area for 2016-17. And as for the goaltending, call fans spoiled but the RedHawks haven’t really struggled with talent in that area since Enrico Blasi took over the coaching reins 17 years ago, so there’s little reason to believe that will be an issue this season. The defense is arguably the biggest concern, and it’s no knock whatsoever on the incoming and returning players but a compliment to the graduated seniors from last season. The amazing two-way play of Caito, the passion and toughness of Richart, the physical and shut-down ability of Joyaux – that’s half of the blueline on the nightly lineup sheet – will be difficult to replace. Plus a D-corps can either make that transition to collegiate hockey much smoother or rougher for a team with three freshmen goalies. With all of the youth overall, at the risk of sounding cliché, this team may be much better in March than in October, which is the ultimate goal for a hockey team anyway.