Miami’s first weekend of the season would have to be considered a success, as the RedHawks split at No. 10 Providence, losing the opener, 4-3 but winning the finale, 2-1.

Granted the Friars lost several key players from their dominant team of the past two seasons, but keep in mind that PC scored seven goals in Oxford last year in the first game when these teams met and Miami salvaged a tie in the Saturday contest.

Miami’s first weekend of the season would have to be considered a success, as the RedHawks split at No. 10 Providence, losing the opener, 4-3 but winning the finale, 2-1.

Granted the Friars lost several key players from their dominant team of the past two seasons, but keep in mind that PC scored seven goals in Oxford last year in the first game when these teams met and Miami salvaged a tie in the Saturday contest.

Especially with the win coming in the Saturday game, Miami has to have momentum heading into a five-game homestand, with very winnable games on tap.

The occasional disappointment is still expected this season as half of the team becomes acclimated to the physicality and speed of the Division I game, but a split in a hostile environment against a national power is a fine start and sets an outstanding tone heading into the rest of the season.

A look at how those position battles are shaking out…although unfortunately viewing this game was not in the cards on this end. BoB will get a much better look at everyone with five straight at Cady Arena in the next 15 days.

– Coaches are always going to say there are constantly positional battles for lineup spots, and based on Week 1 it looks like two defense slots are still being decided as well as one forward spot. Coach Enrico Blasi’s typical MO has been to let competitions play out the first half of the season and then solidify his lineup more in January.

Positional battles are healthy within a team, although the obvious downside is that qualified players sometimes sit. But here is a look at those competitions.

Forwards – Alex Alger and Willie Knierim both played one game at PC. Alger played on Friday and went minus-1 with no shots or points. Knierim dressed for Game 2 and did not have a shot or a point and took one minor penalty. Alger is more experienced and smaller while Knierim is a wide-bodied true freshman who is expected to get better as his Miami career progresses. 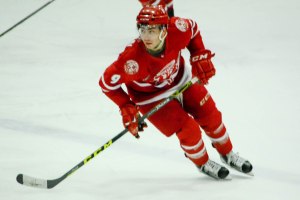 The four freshmen that were in the lineup for Friday and Saturday were Gordie Green (two assists), Carson Meyer (one goal), Carter Johnson (one assist) and Karch Bachman (Florida Panthers draft pick).

This team has only 14 forwards, so with Christian Mohs injured, Alger and Knierim will likely vie for that final lineup spot, although Colin Sullivan could move up from his traditional defense spot.

Defense – Jared Brandt is the lone freshman to hit the ice in both games last week, and he had a zero rating with one penalty and two SOG. Louie Belpedio, Scott Dornbrock and Grant Hutton, to no one’s surprise, were also dressed for both games.

Assuming Brandt will be a mainstay on the blue line, that leaves four defensemen for two spots. Grant Frederic, Bryce Hatten, Chaz Switzer and Sullivan all played one game opening weekend.

Frederic is one of the favorite to play each night although he went minus-3 with two penalties on Friday. Hatten is still working his way into game shape after an injury-plagued 2015-16 and took a major penalty in his start. Switzer went minus-1 and Sullivan, who is a senior and was solid for Miami last season, had a zero rating and did not go to the box.

Goaltending – We’ve seen Jeff & Eff, Cody & Connor and Jay & McKay, and since Jeff Zatkoff’s ridiculous junior season in 2007-08, the backup goalie has played at least 16 games. But Ryan Larkin logged all 119 minutes in the opening weekend, going 1-1-2.52 with a .906 save percentage.

At some point during this homestand it’s likely that we’ll see backup Chase Munroe, who posted a 2.22 GAA in the NAHL last season.