OXFORD, Ohio – Miami trailed on three occasions Friday but thanks to the second goal of the night by Louis late in the third period, the RedHawks salvaged a tie. 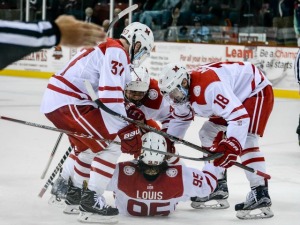 Miami and Maine skated to a 3-3 draw at Cady Arena in the first-ever meeting between these teams on MU’s campus after the RedHawks fell behind by one goal in all three periods but generated the equalizer each time.

The Black Bears (3-1-1) took the lead 5:36 into the first period when Peter Housakos stole the puck from Miami defenseman Chaz Switzer, skated in alone on RedHawks goalie Ryan Larkin from the side of the net and backhanded it in.

Miami (1-1-2) tied it nearly a full period later, as Kiefer Sherwood slid a pass from behind the net to a wide-open Grant Hutton, who stuffed in under goalie Rob McGovern 5:29 into the middle stanza.

Just 1:23 later, Maine’s Mitchell Fossier tipped a blue line wrister by Mark Hamilton past Larkin to give the Black Bears a 2-1 lead.

The RedHawks pulled even again when Josh Melnick eluded a defender along the boards and found Anthony Louis in the high slot. Louis one-timed it, and the blast was partially stopped by McGovern but trickled across the goal line with 6:59 remaining in that frame.

Hutton lost the puck deep in his own end, and Dane Gibson dropped a pass to Cedric Lacroix, who wired a shot short side just under a crossbar with 6:26 left in regulation, giving Maine a 3-2 lead.

A power play set up Louis’ tying goal, which he scored after penetrating to the middle of the faceoff circle and beating McGovney on the glove side.

Miami was on the power play for the closing seconds of regulation and the first minute and a half of overtime but could not convert. The RedHawks finished 1-for-8 on the power play while going perfect on three penalty kills.

Louis’ goals were his first two of the season, and Hutton notched his second. The duo is now tied for the team lead in markers.

Sherwood picked up a pair of assists, giving him the outright team lead in assists (4) and points (5).

The teams played a 3-on-3 demonstration after the game, during which neither team scored, and that was followed by a shootout, won by Maine.

Miami and the Black Bears wrap up their weekend series at 7:05 p.m. on Saturday.