Finally a home win for Miami

OXFORD, Ohio – After 239 days, Miami finally found itself in the win column on home ice. 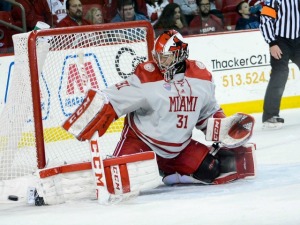 Including this one, Ryan Larkin turned 33 shots aside to lead Miami (photo by Cathy Lachmann/BoB).

After an excruciatingly long off-season and a pair of ties in their first two games at Cady Arena, the RedHawks shut out Maine, 5-0 on 33 saves by Ryan Larkin on Saturday to wrap up a 1-0-1 weekend.

The RedHawks’ last win in this building was on Feb. 27 vs. Colorado College, also a shutout. Miami’s last three home wins have all come by blankings.

Miami thought it had the lead in the first period on a bad-angle rip by Carson Meyer, but the Black Bears challenged and the play was ruled off-side.

But the next one counted, as Anthony Louis and Josh Melnick played give-and-go in the offensive zone in the first period, with Melnick dropping a pass to Louis in the slot for a wrister that beat Rob McGovern 3:42 into the second period.

Just 25 seconds later and six seconds into a power play, a wrist shot by defenseman Louie Belpedio beat McGovern on the glove side to make it 2-0.

With 9:42 left in the middle stanza, Belpedio struck again, this time whipping one just under the crossbar from the top of the faceoff circle to extend the RedHawks’ lead to three.

An offensive-zone feed off the transition by Carson Meyer set up a 2-on-0, with Kiefer Sherwood sliding one across to blueliner Scott Dornbrock for a point-blank blast to run it to 4-0 with 13:19 left in regulation, ending McGovern’s night.

Sherwood capped off the scoring with a close-up one-time rip of his own on a centering pass from Karch Bachman feed from the side of the cage. Sherwood had set up the chance with a stretch pass along the boards and then skated into the slot for the goal with 10:46 left.

Sherwood finished with a goal and two assists for a five-point weekend, and Meyer picked up three helpers, as both recorded career highs with three points.

Belpedio’s two-goal game was the first of his career, and Louis ended the night with a goal and an assist, giving him three markers and one helper in two games.

Ryan Larkin’s shutout was the first of his career. He made 24 stops in the final two periods.

After losing its season opener in Providence, MU is unbeaten in its last four (2-0-2).

Miami will host Bowling Green in a two-game set next weekend. The RedHawks swept the Falcons in a home-and-home season series in 2015-16.