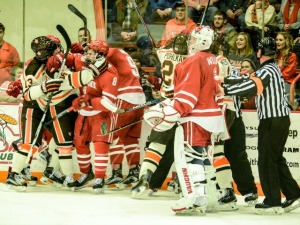 NOTES: What in the world is happening at Bowling Green?

The Falcons were ranked in the top 15 in USCHO’s preseason poll, and they were picked to win the WCHA, yet BGSU has yet to win a game and dropped its first two conference contests.

Bowling Green has gotten miserable goaltending, as the Falcons have allowed 29 goals in six games – the second-worst average in the NCAA – for a unbelievably poor team save percentage of .806. BGSU is only allowing 25.2 shots per game, so it’s hard to pin those numbers on the blueline (actually the Falcons have outshot their opponents thus far).

Chris Nell gave up eight goals in less than four periods vs. Ohio State last weekend, but he still has the best numbers on the team with a 3.79 goals-against average and .841 save percentage.

Freshman Ryan Bednard is a Florida draftee, but in his first outing, he surrendered four goals on nine shots in just over a period.

Defenseman Sean Walker leads the team in goals (3) and points (5), and forwards Matt Pohlkamp and Kevin Dufour have four points each. All three are seniors.

Mitchell McLain, Brett d’Andrea and Stephen Baylis have added three points each from the forward corps, and Pierre-Luc Mercier has 58 career points in 123 games.

Other than Walker, two Bowling Green defensemen have been drafted – Mark Friedman, who has scored one and picked up two assists, and Adam Smith, who has dressed for five games.

Special teams have been a disaster for the Falcons, who are tied for second-last in college hockey with a 66.7 penalty kill percentage and are 46th on the power play at 10.6 percent.

Miami is 11th on the man advantage at 21.4 percent and tied for tops in the NCAA with a 96.7 PK percentage.

If this series comes down to goalies, the RedHawks should have a definite advantage, as freshman Ryan Larkin is 13th in the NCAA in save percentage (.931) and 11th in GAA (1.75).

The RedHawks are 18-1-1 against Bowling Green in these teams’ last 20 meetings, although the Falcons still hold a 59-49-8 advantage all-time.