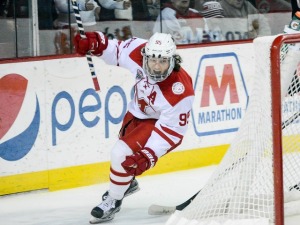 But the RedHawks, who led by three goals with four minutes remaining in the second period, allowed five consecutive goals down the stretch in a 6-4 loss to Nebraska-Omaha at Cady Arena on Tuesday.

The Mavericks (5-3-1) jumped on top early, as Mason Morelli tipped in a blue line shot by Ian Brady just 7:21 into the first period on the power play.

The RedHawks tied it with 3:29 left in the frame when Anthony Louis carried the zone, skated along the boards and centered a pass to Josh Melnick, who one-timed the puck home from the high slot.

Miami took the lead on an innocuous wrister by Scott Dornbrock from along the boards that Conor Lemirande redirected home 6:23 into the second period.

Dornbrock picked up another assist when he slid a pass to Louis in the high slot, and Louis buried a shot to the stick side for his 100th career point with 10:09 remaining in the frame.

Just 34 seconds later, the Louis penetrated uncontested and roofed a backhander from the center of the faceoff circle on the short side to make it 4-1.

But UNO cut the lead to two prior to the second intermission, when Steven Spinner stole a Louis pass, skated the length of the ice along the boards and connected with trailing defenseman Joel Messner, who buried a shot to cut the deficit to two.

Jake Randolph made it a one-goal game 83 seconds into the final stanza on a tip-in off a blue line wrist shot by Messner.

The Mavericks tied it when Spinner picked off a Melnick pass in the neutral zone, skated in and went top shelf for a shorthanded goal with 14:13 left in regulation.

That ended the night for Miami goalie Ryan Larkin, the RedHawks only goalie used this season to that point, as he gave way to freshman Chase Munroe, who made his MU debut.

Munroe was greeted rudely, as Luc Snuggerud’s slap pass from the blue line found the blade of David Pope’s stick for a redirection goal that gave UNO a 5-4 lead with 8:05 to play.

The Mavericks sealed it when Morelli scored an empty netter after Austin Ortega intercepted a Louis centering pass from behind the net.

The RedHawks have surrendered 17 goals in their last three games and have been outscored, 9-0 during their current four-game skid.

Louis finished with three points, giving him 101 for his career and a team-high 14 on the season, including a Miami-best nine goals. All of his points have come in the last eight games.

Melnick recorded a goal and an assist for his first multi-point game of the season, and Dornbrock ended the game with a pair of helpers, his first two-assist game since Jan. 29.