OXFORD, Ohio – For Miami, PairWise doesn’t matter, seeding has been wrapped up and the RedHawks even know their first-round opponent in the NCHC Tournament.

That means after Friday’s 3-2 loss to North Dakota, Saturday’s regular season finale will be little more than a glorified exhibition.

For official purposes that is. Miami can certainly conjure up reasons to take its last game at Cady Arena in 2016-17 seriously.

Trying to gain momentum heading into a brutal road trip – the same one that saw the RedHawks’ season end last year – would be the most obvious.

But it’s been no secret Miami would open the NCHC Tournament on the road for weeks now, and the RedHawks still went winless the entire month of February and have opened March 0-1.

Next week’s opponent, Minnesota-Duluth, swept Miami to end the 2015-16 season and just went 1-0-1 vs. the RedHawks last weekend. The Bulldogs are ranked second in Division I.

But that was with recruits from the previous administration. With his own players, Blasi has won at least 15 games each season, although two of the previous three campaigns have seen the RedHawks win exactly that many with sub-.500 winning percentages.

So Miami needs to win on Saturday and advance to Minneapolis just to tie Blasi’s low-water mark in terms of wins.

To be fair, the RedHawks have tied seven times, so essentially that have 12½ wins. But the team’s .379 winning percentage is 47th out of 60 Division I teams.

And hey, the NCHC’s lone knock – right or wrong – is the lack of an identity and natural rivals. North Dakota was one known quantity when this league was formed. The Native-American-turned-avion-nicknamed team has appeared in more championships than any team in Division I (13) and is second in titles (8).

Oh yeah, UND won the national championship in 2016. Can Miami possibly get up to play this team on its home ice, even in a down year? 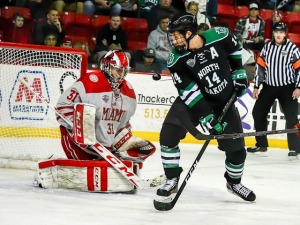 Miami’s Ryan Larkin makes one of his 38 saves on Friday (photo by Cathy Lachmann/BoB).

Because the RedHawks didn’t do that in their penultimate home game of the season. North Dakota had seven shots in the first four minutes, and if it hadn’t been for Miami goalie Ryan Larkin, it could’ve been 2-0 before many found their seats at Cady Arena.

The RedHawks had their moments on Friday but there was zero sustained pressure. On the other side, the Other Hawks controlled the puck in the offensive zone for shift after shift.

There’s the cliché that winning is contagious. Well, so is not winning, and Miami has failed to secure a victory in 11 of its last 12 games.

A win on Saturday won’t fix the RedHawks’ seed, or their PairWise or even do much to correct their anemic record, but it could point them in the right direction heading into the playoffs.

– Time to dispel the “we’re young” excuse for Miami’s woeful performance this season. North Dakota has eight freshman and 11 sophomores – that’s 19 underclassmen, using the first two years of college definition – and five juniors and two seniors. One of those seniors is a goalie who has logged 18 career games.

– If we’ve learning one positive thing about a player this season, it’s that Gordie Green’s work ethic is top notch. It’s easy to get off your game when the team you play for rivals the Jacksonville Jaguars in terms of winning percentage, but he has thrived while the team has done the opposite. Green has three goals and five assists his last eight games, and Miami only has 19 markers in that span, meaning Green has factored into 42 percent of those. He even laid a player out on Friday and was assessed a bogus charging penalty even though he neither lined his opponent up nor left his feet.

– Impressed with Carter Johnson, who made a great move and just missed the net in the second period and had another quality scoring chance in the third period. Kudos also to Zach LaValle, who has continued to work as hard as anyone this season resulting in eight points in his last 16 games.

– With Louie Belpedio out, it was Josh Melnick who met with officials and UND captain Gage Ausmus during warm-ups. Very telling.

– BoB is not big on criticizing officiating, but seriously, in this game, 7-to-2 on power plays including an extended 4-on-3 that led to the decisive goal? It was a chippy game, no doubt, but come on. That said, UND made the most of those opportunities, outshooting the RedHawks, 17-2 on the man advantage and scoring a shorthanded goals on one of Miami’s chances.

– To complete the thought on penalties, Grant Hutton’s cross check to the head of a player laying in Miami’s crease wasn’t the smartest play of the season, and Conor Lemirande took three minors, eventually resulting in him being relegated to the bench for the balance of the third period. North Dakota a was better at getting under the RedHawks’ skin and watching MU get called for the retaliation.

– With this being the first time seeing the Fighting Hawks live this season, their skating and puck control stood out as two of their top attributes. They also move the puck extremely well on the power play. Hard to believe they were just two games over .500 entering this weekend. As usual, their fans traveled well, as this was the loudest any opposing fan base has been in this rink all season.

– With the regular season wrapping up, it’s about time we consider hanging numbers of more recent members of the Miami hockey clique on the brick wall at Cady Arena. For now, Andy Greene and Ryan Jones certainly seem worthy of having their respective 23 and 26 mounted in the Zamboni end.

– Louie Belpedio was in the concourse wearing a knee brace. Sounds like he’s just week-to-week, but unfortunately for Miami, do-or-die mode starts next week for this team. Obviously his return would help tremendously.

DEFENSEMEN: C-. The listed pairings bore little resemblance to how these blueliners were actually implemented in game. Scott Dornbrock had a decent game overall but coughed up the puck for the decisive breakaway goal. Other than an errant turnover, Grant Frederic played one of his better games.

GOALTENDING: B+. Again, when a goalie faces 41 shots and many are Grade-A chances, three goals against is a pretty good night. Larkin kept Miami in the game by stopping the first seven shots he faced in the opening four minutes. Other than arguably the breakaway, there was little he could’ve done about any of his goals against.

LINEUP CHANGES: For the third straight game, it was Alex Alger (F), Bryce Hatten (D) and Belpedio sitting. Hatten has been scratched for 15 of the last 16 games, so if Belpedio returns, it would be the expense of one of Friday’s starters on defense. With his forward corps relatively healthy, it appears this 12 from this game will be the group Blasi heads into the tournament with.