It’s always tough to watch a team you root for get blown out.

In certain sports with significant parity, it does happen to even the best teams.

So in the ultra-competitive world of NCAA Division I hockey, there’s no reason to panic after Miami fell behind five goals in the first period in a 6-3 loss to Maine on Saturday.

Not at all dismissing this pounding, but it’s still very early in the season and the RedHawks did earn a split on the road, which is rarely a bad thing.

There were a number of positive things to take from this game for the Miami fan.

– Miami did fight back after falling behind by five early. Sometimes in hockey we see blowouts snowball, and at least the RedHawks battled down the stretch, cutting the final deficit to three.

– The power play is unreal. With Grant Hutton taking an active role on the man-advantage and Gordie Green joining the first unit full-time, Miami was 7-for-10 (70 percent) this weekend. And 3 of 5 in the finale, showing that even after the RedHawks lit the lamp four times on the man-advantage on Friday, Maine was unable to adjust.

– And I know it’s not always popular to say, but the chippy-ness we saw in this game can generate momentum and galvanize a team. There were two skirmishes on Saturday, and in the first Green was targeted along the boards after a stoppage. He not only stood up for himself, Rourke Russell came to his defense and was engaged with opponents the entire time, and Carson Meyer got involved as well. The my-teammate-has-my-back mentality is a bigger factor in hockey than almost any other sport, and such an incident can only help a young team. 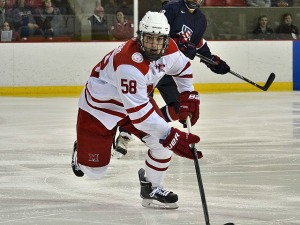 – The other altercation: Captain Louie Belpedio ended up in a scrum midway through the third period and was tossed from the game. Sometimes captains have to get involved in these things. Again, this shows the team youngsters that the captain has everyone’s back.

– And good for the officials, Jack Millea and Kevin Keenan, about whom I know nothing other than they handled the after-the-whistle antics very well. No reason to suspend anyone, instead choosing the 10-minute misconduct option to address the possibility of repeat offenders.

– So Ryan Larkin. Again, blowouts happen. At one point, Patrick Roy let nine in for the Canadiens. Admittedly, he’s not exactly dominating, but let’s remember that this was a player who was named team MVP as a freshman at the team’s awards banquet. That’s a rarity. He had a .910 save percentage in 2016-17 despite getting pelted with Grade-A chances. The smart money is on him rebounding, and soon.

– Follow up to that point: Larkin did have a .792 winning percentage for the weekend, and it’s interesting that Grant Valentine backed him up on Saturday. Valentine logged nine-plus minutes and stopped 2 of 3 shots, giving up a low between-the-pads goal. Chase Munroe played the entire exhibition game in Plymouth, Mich., last weekend, and he allowed five goals. He was the backup down the stretch in 2016-17, so it looks like coach Enrico Blasi prefers Valentine as a backup at this point. But as long as he is healthy, it’s obvious the net currently belongs to Larkin, and if that’s the case through 2019-20, Miami will likely thrive.

– The RedHawks pulled the goalie down by four late, which typically indicates a coach thinks his team has played well enough that it deserves a chance to play on what’s essentially a power play. Hutton scored on the 6-on-5 to make it a three-goal game. Really, if you’re going to lose, who cares if it’s 3-2 or 13-2? Coach Blasi doesn’t, and I’m in agreement.

– It wasn’t a great night for Chaz Switzer. He was beaten, 1-on-1, resulting in Maine’s first goal, and his penalty on that play ultimately resulted in a 5-on-3 for another Black Bears goal. He was also on the ice for Maine’s third goal.

– Some perspective about Hutton’s scoring rate: He has 14 goals in 40 games since the start of 2016-17, and 10th place on BoB’s unofficial all-time career defenseman goal leaderboard is Josh Harrold with 15. With five goals in five games already this season, Miami could be looking at one of its top-scoring blueliners of all-time.

– Veli-Antti Tiuraniemi, a Black Bears defenseman, was committed to Miami last season and appeared to be headed to Oxford this fall. Instead he had a goal and an assist vs. the RedHawks.

– Thanks to the University of Maine for its free high-quality online stream. The game experience in Orono is supposed to be fantastic, and BoB wishes the Black Bears nothing but success in the future, especially since subsequent wins by Maine will affect the PairWise!

LINEUP CHANGES: F Zach LaValle was scratched after dressing for the first three games. Alex Alger played for the first time this season in his place. F Ryan Siroky replaced Ben Lown for both games this weekend. On defense, Alec Mahalak sat for the first time in 2017-18, as Grant Frederic logged his second game of the season. Fs Willie Knierim and Carter Johnson, plus D Bryce Hatten are the only Miami players not to log ice time this season, although Knierim played in Plymouth.