Analysis: Finishing an issue in finale

OXFORD, Ohio – For a period that did not see a goal scored, the final stanza of Saturday’s game was certainly bizarre.

After scoring the go-ahead tally with 0.1 seconds left in the second period, Colorado College held on for a 2-1 win over Miami at Cady Arena as the teams split the weekend series.

Just over six minutes into the third period, the Tigers appeared to have scored their third goal on a blast from the blue line.

The RedHawks’ coaching staff, players nor goalie Ryan Larkin seemed to have any objection, but after a review the goal was waved off because of an alleged crease violation.

Already down a player – and Gordie Green for that matter – his linemate and top penalty killing forward Josh Melnick was whistled for tripping, giving Colorado College a 5-on-3 for a minute and a half.

The Tigers were then assessed a holding penalty five seconds later, making it a 4-on-3 for 1:25.

On a side note, if that was intended as a make-up call, cutting an advantage from 5×3 to 4×3 doesn’t help the shorthanded team much, since a 4×3 is statistically almost as lethal.

But to continue, Miami killed the one-and-a-half-man advantage.

A couple of minutes later, Green ripped a one-timer from the slot that went just wide, and the goal light went on erroneously.

Then a Zach LaValle penalty with 5:14 left, and Casey Gilling received a 10-minute unsportsmanlike conduct on the same play (NOTE: The latter usually means a player used the magic word when talking to officials).

Miami killed that power play and drew a boarding call with a minute left. But despite finishing the game 6-on-4, the RedHawks were unable to repeat Friday’s comeback heroics.

Credit does go to the Tigers’ goalie Alex Leclerc, who stopped 26 of 27 shots.

Miami went 3-1 on the homestand and is now 4-4 after a 1-3 start, but the loss stings because the RedHawks outplayed Colorado College overall in this one.

On Friday, the teams were pretty even and both played well, but CC wasn’t on its game Saturday and Miami still couldn’t get any points.

– Annual disclaimer that we like to keep criticism of officials to a minimum, since in theory it should even out and making them a part of the game can appear whiny and hurt credibility. That said, the refs didn’t have a good weekend. The power plays were 14-8 in favor of Colorado College for the series, and the Tigers weren’t that much better than Miami. Actually the opposite.

It was called tight on Saturday, and then interference became a game strategy and was let go. To be fair, the goalie interference called on Colorado College in the first period on Friday was one of the worst calls at Cady Arena in some time.

It stings more when the borderline calls end up in the violators’ net, and the Tigers scored three times on the man advantage this weekend. Miami had zero PPGs.

– Miami had its chances but missed to net too often in this one. The RedHawks scored on their final shot of the first period and put 18 on net the final 40 minutes but none hit twine. A number more solid opportunities missed the net entirely, and there was also a late post on a one-timer (Grant Hutton maybe?). Miami possessed the puck a lot and ended the night with just one goal.

– Not sure who failed to pick up Wade Michaud, who joined the power play rush late in the closing seconds of the second period, but he was left wide open to skate in and score the decisive goal. The replay quality isn’t great, but it appears the pass from the along the boards was partially deflected by Green and ended up right on Michaud’s stick. Melnick, Grant Hutton and Chaz Switzer were also on the ice for that critical kill.

– A side note that Colorado College only had five healthy defensemen this weekend. So the Tigers are young (no seniors) and were shorthanded on the blue line, which means Miami will face an even tougher task when they head to Colorado Springs in January to play a jelling CC team at high altitude.

FORWARDS: C. The group was decent overall but only finished once. The power play wasn’t that good. Time of possession was excellent, and that alone cut down the number of scoring chances for Colorado College. Overall this corps helped hold CC to five shots on eight power plays, which included an extensive 4-on-3. 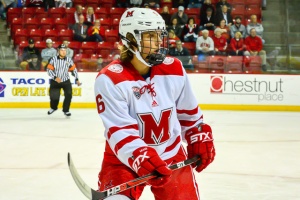 DEFENSEMEN: A-. As mentioned above, the forwards made the blueliners’ job somewhat easier, but the D deserves credit for the Tigers’ shot total of 14, a season low allowed by Miami and the third time in four games the RedHawks have given up fewer than 20 shots. Louie Belpedio took the cross-checking penalty that led to the decisive goal, but it was unclear if that was a warranted call since it was behind the play and there wasn’t a good camera angle of it. Alec Mahalak logged some power play time and looked confident handling the puck. That gives Miami four blueliners who jump on for the man advantage, which is atypical for recent RedHawks teams.

GOALTENDING: C. Ryan Larkin made one spectacular save, but he probably should have stopped one of the two goals. The first one beat him high to the glove side, and he appeared to have gotten the glove up in time. The second one was far enough out that he should’ve had a good look. He stopped only 12, putting his save percentage for the night at .857. That’s four straight games in which Larkin has allowed two goals or fewer. If he can do that most nights Miami should win plenty of games.

LINEUP CHANGES: None. Coach Enrico Blasi continues to ride this corps of 18 skaters plus Larkin. It was not only the fourth straight game using the same 19, the lines are remaining intact. The latter may change if forwards not named Melnick and Green can’t pick up the scoring. The other 10 forwards slots have generated just 11 goals through eight games. It’s a shame to see the same faces in the stands each night but there are no easy answers when a team has 28 players on its roster.