OXFORD, Ohio – Because it was televised nationally, Miami’s game on Friday started a half hour later than normal.

Unfortunately the RedHawks didn’t begin play until well after that.

MU surrendered three goals in the first 10 minutes in an eventual 5-2 loss to No. 4 St. Cloud State at Cady Arena.

Miami (10-14-3) did battle back with a couple of second-period goals but could not generate the equalizer.

Colorado College won at North Dakota on Friday as well, leapfrogging Nebraska-Omaha and pushing six points ahead of the RedHawks, who are 1-6-1 in their last eight. The Mavericks are in seventh, four points up on last-place Miami.

All eight teams in the NCHC will have played 18 of their 24 league games after Saturday, so regardless of the outcome in the final, MU will head into the final three weekends of the regular season in last place.

RECAP: Fans were still filing in when Robby Jackson and Blake Lizotte threw pucks into the net 70 seconds apart, giving SCSU a 2-0 lead just over three minutes in.

It was Mikey Eyssimont extending the Huskies’ lead to three at the 9:39 mark.

Josh Melnick had a pass intercepted at the blue line, resulting in the first goal, Chaz Switzer was skated around by Lizotte and Kiefer Sherwood blew a tire at the red line when Eyssimont scored.

The RedHawks scored 1:47 apart in the second period to cut the deficit to one. 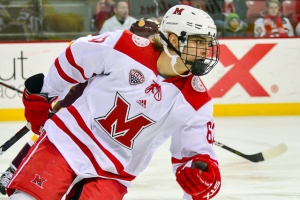 Gordie Green banged home a loose puck from the slot after a pass from behind the net by Carter Johnson was partially deflected. Ben Lown put the puck on net by poking it between a SCSU defender’s legs, and the rebound was jammed home by Phil Knies.

Miami had a couple of chances to tie it late in the second period, but the Huskies iced it seven minutes into the third period when Kevin Fitzgerald stripped Willie Knierim at the blue line and beat goalie Ryan Larkin five hole.

The RedHawks pulled Larkin with over six minutes left, and Jackson hit the empty net for the final tally. 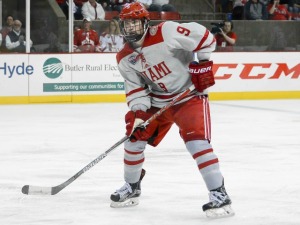 STATS: Green extended his points streak to four games, a current team high. He leads Miami with 12 goals including the one in this contest.

— Only five blocked shots for the RedHawks.

— Johnson’s assist gives him points in consecutive games for the first time in his career.

— Miami failed to score on the power play, snapping a six-game streak. But the RedHawks did not yield a goal on the man advantage for the first time in eight games.

— All seven goals were scored in the south end of the rink.

THOUGHTS: It’s baffling that the RedHawks wouldn’t be ready for this series, and against a team as good as St. Cloud State, Miami paid dearly.

MU tried to battle back and was the better team in the second period, but the damage had been done.

And that’s what’s enough to drive one batty with this team. This team is good enough to hang with the best teams in Division I for stretches but not good enough to win those games.

— Larkin has gotten some leeway because of the quality of shots he’s faced, but he’s getting beaten too often on stoppable shots – especially high to the glove side – and that’s contributing to MU’s second-half slide. His save percentage of .883 would be the worst of any starting goalie since Enrico Blasi’s first season in 1999-2000.

— Johnson is making it harder to keep him out of the lineup. He played 37 games last season and earned just three points and sat the bench almost the entire first half of 2017-18. But he is 1-1-2 his last two games, is providing much-needed energy on the lower lines and is using his size to win battles along the boards.

— St. Cloud State has the best transition game of any team to come to Cady Arena this season. The Huskies are able to go end-to-end in a couple of seconds and create odd-man rushes off of opponents’ misses. They definitely are every bit as good or better than on television.

— Kevin Fitzergerald made arguably the defensive play of the year when he put his stick up and blocked a would-be third-period goal by Casey Gilling at the side of the net. The goalie would have had no chance.

— For the second straight game, Miami had a major power play in the third period with a chance to get back into a game and did bupkis with it. The PP1 has been solid all season but the RedHawks haven’t been able to put together a solid secondary combination of skaters for extended man-advantage opportunities.

DEFENSEMEN: C. Tough call here. Didn’t give up too many great scoring chances except for the second goal, didn’t contribute anything offensively. Grant Hutton was definitely the star of this class.

GOALTENDING: D. Larkin needed to stop at least one of the goals allowed, especially early when the game was in the balance. He has tons of talent but it’s unclear if he’s struggling because of the high number of minutes played or a waning confidence level after facing so many Grade-A chances.

LINEUP CHANGES: None. This was the third straight game Blasi started the same 19.

FINAL THOUGHTS: St. Cloud State (18-6-3) is a force and should contend for the national title. The Huskies played like champions in this game, taking the crowd out of it early, fending off Miami’s rush in the middle portion of the game stepping on the RedHawks’ throats in the end game.

SCSU is fast, handles and moves the puck exceptionally well and still manages to limit opponents’ opportunities despite playing an up-tempo style. And the Huskies were missing a defenseman who is playing for Team USA in the Olympics.

Fortunately this is one of the two NCHC teams the RedHawks only play twice this season.