← Atypical path to D-I for Dornbrock
Miami goes down 3, wins in OT →

But in 2014, left wing Conor Lemirande pounced on the opportunity to fill that role with Miami alongside his cousin, Andrew Schmit.

And Lemirande has thrived as a grinder with the RedHawks since, dressing for 133 games and loving every shift.

“The moment I stepped on the campus I knew it was the right place,” Lemirande said. “Obviously with Andrew here, my cousin, I had some inside information, and he told me how nice it was and what a great opportunity it would be, so as soon as that was offered I couldn’t resist that.” 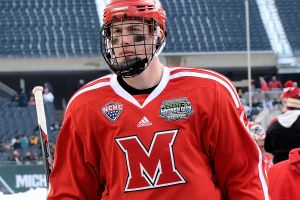 Conor Lemirande at the outdoor game at Soldier Field (photo by Cathy Lachmann/BoB).

The duo was informally nicknamed the Crash Cousins for Lemirande’s first two seasons, and at a combined weight of 500 pounds, that tandem often comprised two-thirds of Miami’s fourth line.

Size is a family tradition in Lemirande’s extended family, which is from Janesville, Wis. His father, Jeff, refers to himself as one of the smaller males in the clan at about 6-5.

Lemirande’s brother Logan is also in that height range.

Schmit is 6-5, about the same height as his father, Robb.

“It definitely makes it hard for family meals,” Lemirande said. “We’d have all the kids there, and the parents there. My dad would actually go to the farm and buy a full cow just for the year and get that going. He’d have pigs for all of us. We consumed a lot of food during the week, I can tell you that.”

Lemirande started hockey around age four, and he played baseball through eighth grade and football – a family staple – until his junior year.

With his girth, the temptation was there for at least one coach to try him on defense early in his career.

“I was a defenseman my pee wee year, and that was it,” Lemirande said. “I did a camp, and it was actually coach Bob Suter from Madison, and he told me, you know, I want you to try out at defense. I did it in his summer camp, and after that, I was like, you know, I like getting in on the forecheck, I like being that physical presence, and my coach the next year really liked that, so (forward) is where I stayed.”

He spent two seasons at in-state Madison on Under-16 and Under-18 teams before signing with the hometown Janesville Jets of the NAHL prior to 2011-12.

Lemirande logged 110 games over two seasons there, becoming team captain and tallying 32 points. He played against his brother, Logan, who was on Port Huron in the same league.

“Obviously that was a great opportunity to play in front of a crowd in Janesville,” Lemirande said. “It was pretty awesome.” 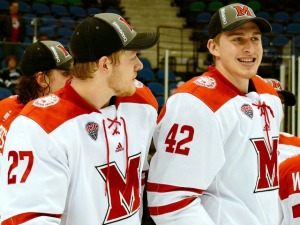 He was drafted in the USHL his second year at Janesville and ended up in Youngstown, where he scored seven goals and picked up 10 assists in 58 games.

From there it was south to Oxford, where Lemirande dressed for opening night of 2014-15, nine days after his 21st birthday. He was in the lineup for the team’s first 23 games and 36 overall that season, which culminated in an NCHC Tournament championship and NCAA berth.

“You know, that was an unbelievable opportunity to have that group of guys and be fortunate enough to go through that,” Lemirande said. “It’s one of those things that I’ll never forget, just the lifetime bond. That experience and having that feeling of playing on the biggest stage – that was a lot of fun.”

Lemirande’s lone goal that season came vs. Notre Dame in a Florida tournament, but as a sophomore, he would log the offensive game of his career.

In a Jan. 23, 2016 contest at Nebraska-Omaha, Lemirande slammed home a loose puck with four minutes left in the first period to give the RedHawks a 1-0 lead.

Miami was up 3-1 midway through the second period when Lemirande again found the net, this time banging home a centering feed by Alex Gacek. Just over three minutes later, he scored again on a double deflection that was also redirected by Schmit.

That completed the hat trick – including the game winner – with Schmit picking up primary assists on two of the goals.

“That did happen,” Lemirande said. “(The first goal) I just found the back of the net – got a greasy one – and then the second one was a shot from about the dot lane, and then the third one was actually a shot from the point. Andrew had actually deflected it and then I re-tipped it again, so it was a double tip for a third goal. So Andrew was celebrating, we were both celebrating, happy, so obviously a great opportunity there. From a guy not getting a lot of points, to have that opportunity is kind of a fun thing.”

That was the last three-goal game recorded by a Miamian.

Lemirande was limited to a goal and an assist his junior season, but his 2017-18 line is 1-4-5, already a career high in helpers and points.

Of those helpers, two came in a win at Bowling Green on Nov. 24, his only career multi-assist contest.

Captain and senior defenseman Louie Belpedio roomed with Lemirande freshman year and currently lives across the hall from him.

“He’s kept the same role throughout those four years here, but as he’s progressed he’s done a way better job,” Belpedio said. “He’s done a great job for himself and his team and I’m happy for him.”

Conor Lemirande as a senior (photo by BoB).

For his career, Lemirande has scored six times and set up eight more scores, but most of his contributions do not appear on a scoresheet.

“I think he’s a really good role player,” Belpedio said. “He comes to the rink with the right attitude every day and he knows what he’s supposed to do on the ice to be successful. He’s obviously not looked to to score goals but he’s looked to to do all the little things right and be solid defensively, and in my opinion he’s been our most consistent guy all year. So my hat’s off to him.”

Lemirande has also gained additional minutes as he has been added to a penalty killing role this season.

Forwards at his size are unusual enough, but it’s even less common to see 250-pounders up front when their teams are shorthanded because four skaters have to defend five on the PK.

“He’s a bigger guy, obviously takes up a lot of shot lanes, he’s got a long stick so that helps a ton,” Belpedio said. “He’s worked for everything he’s gotten…that’s the type of kid he is and he’s a huge part of our team.”

His additional ice time on the PK is a direct result of his overall evolution on the ice. Defenseman Scott Dornbrock has played with Lemirande for four years and has also been his roommate the entire time the pair has been in Oxford.

“He’s progressed a ton over his three years – he’s (been) one of our best forwards all year,” Dornbrock said. “He allows our top-line guys to go out there and do what they do because he goes out there the shift before and really grinds down the team. People are watching out when he’s on the ice because they obviously don’t want to get hit. It definitely gives us an advantage to have him out there because he’s always moving his feet and always getting in people’s faces.”

As in any sport, more versatility equals more playing time.

“(I’m) working every day to be who I am to give my best to being that physical presence, be that guy that can be relied upon and trusted in different situations,” Lemirande said.

Said Belpedio: “For a big guy he moves extremely well and he’s always doing little things to get his feet faster. He’s worked on his skating, and it’s paid off a ton in his four years here.”

As a defenseman, Dornbrock frequently battles with Lemirande in practice. Through that experience, Dornbrock has learned how to handle the giant on skates in 1-on-1 battles.

“Most of the time I don’t even hit him because I know that I’m not going to get through him,” Dornbrock said. “So I always just stay on the outside of him and wait for him to make a mistake.” 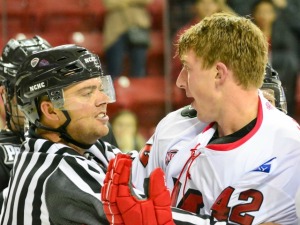 Conor Lemirande talks to an official (photo by Cathy Lachmann/BoB).

Lemirande’s positivity at the rink is another tangible attribute, Belpedio said, and his attitude is infectious.

“He’s just awesome to be around,” Belpedio said. “He generates energy for everyone else on the bench, and he says the right things at the right times and he fits perfectly into his role.”

And Lemirande’s personality extends off the ice.

“He’s one of my best friends – I have a lot to say about him,” Belpedio said. “He’s probably one of the nicest kids I’ve ever met. He’s always doing the right thing, and he’s one of those people you want to surround yourself with, whether it’s a serious situation or you’re just joking around. He’s just a good person to be around. He’s awesome. If the world was filled with Conors it would be a much better place.”

Said Lemirande: “I like to have a smile on my face, I like to be positive all of the time, bring that good attitude. It’s fun to be around ‘Lou’ and Scotty – we were living together my freshman year, all three – being around the guys, it’s such a blessing, and being grateful for the opportunity we have here. Just helping everybody out, if somebody calls you and needs you, (being the) first guy there, that kind of thing.”

Lemirande’s last two homes games will be this weekend, and he is set to graduate in May.

He has a 3.4 grade-point average, earning him All-NCHC Academic honors this season, and he is majoring in sports management. Lemirande has already completed his core classes and is down to electives.

“It goes by quick, and you want to tell everyone how fast it goes,” Lemirande said. “What a great opportunity we have here, being a part of the (hockey) program and at the school. I wouldn’t change a thing. Being there every day and being around the guys is something that I’ll never forget. I’ll share with my kids how special that opportunity is.”

← Atypical path to D-I for Dornbrock
Miami goes down 3, wins in OT →