← Assistants, players out after 12-win season
The Miami off-season timeline →

Carson Meyer is leaving Miami University, according to a story by The Athletic, and said a tapeworm is to blame for his struggles the past season-plus. 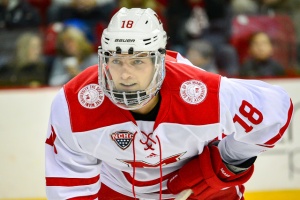 He is “hoping to transfer to Ohio State”, the piece said, adding that “there were issues with the coaching staff, specifically coach Rico Blasi, that Meyer doesn’t want to discuss publicly”.

On Feb. 27, the Columbus Blue Jackets draft pick discharged a 25-inch tapeworm, according to his mother, Holly, and Carson’s mental and physical health has been much better since.

Meyer recorded 22 points in his first 19 games during his freshman season but posted just 14 in his final 47, including a 6-4-10 sophomore campaign in which he went minus-22.

(Here’s a link to The Athletic’s story, which is behind a Paywall: https://theathletic.com/362923/2018/05/22/absolutely-freaking-out-blue-jackets-prospect-carson-meyer-and-the-parasite-that-ruined-his-season/)

Carson’s departure from Oxford brings the number of team defectors to six this off-season. Fellow Columbus-area native Kiefer Sherwood turned pro, and a story in March stated that four other players are not expected back.

Willie Knierim is one of them, as he annouced via Twitter he is returning to Dubuque of the USHL, and it became known that brothers Alex and Austin Alger would not return when they did not attend the team’s awards banquet last month.

The team has typically released its roster for the following season in late spring.

That leaves just 15 skaters from last season expected to take the ice for Miami this fall, and only three recruits have officially signed National Letters of Intent to join the team in 2018-19.

← Assistants, players out after 12-win season
The Miami off-season timeline →