NOTES: Four of Miami’s starting six defensemen are back from last season, but the two who graduated were key contributors on the blue line.

Louie Belpedio was team captain for two seasons and Scott Dornbrock logged 139 career games, but Miami adds four to its blueline corps and will have nine D-men to battle for six starting slots each night. 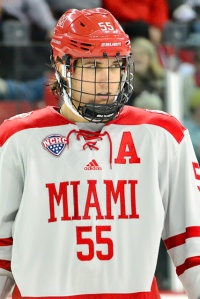 “I think we’re a lot deeper, bigger, stronger,” Miami head coach Enrico Blasi said. “I think whe you add some of the size that we did and just sheer bodies, it’s going to be equally hard to come up with six (starters) on a game-to-game basis.”

All-planet senior Grant Hutton will share the captaincy with Melnick after leading college hockey in defenseman goals with 13 and tying for the Division I lead in power play goals by a blueliner (8).

He has also been arguably the team’s best shutdown D-man the past three seasons.

Alec Mahalak dressed for 36 of 37 games as a freshman and seemed to gain confidence in every facet as last season progressed, finishing 1-8-9. His size (5-feet-9, 165 pounds) worked against him defensively at times but he proved he can make smart plays, carry and pass the puck.

Rourke Russell is a shutdown defenseman who was in the lineup 34 times his rookie season. He got tougher to play against later in the season, blocking 51 shots, and Chaz Switzer, who played 32 games, showed improvement in his second campaign with Miami and finished with 47 blocks.

Grant Frederic only saw the ice 15 times but also seemed more confident in his second go-around, using his big body to defend more. If Frederic continues to make the case for a lineup spot as well as the four other returning blueliners, that would leave just one spot for four freshmen.

And Derek Daschke is considered the defensive blue chipper of this incoming class. He has logged 232 USHL games in four seasons and went 8-21-29 in 2017-18. The 6-feet-2 blueliner played under associate head coach Peter Mannino in Chicago en route to a Clark Cup title two seasons ago.

At 6-feet-6, Brayden Crowder will join Michael Findorff and Brian Sipotz among the tallest Miami D-men.

Andrew Sinard will also join that list of trees on the RedHawks’ blue line, as he is also 6-6 and listed at 185 pounds. He did not score a goal in 96 NAHL games but did pick up 21 assists in that span.

Dartmouth graduate River Rymsha joins Miami for his senior season. He is also a big body at 6-3, 205 pounds, and dressed for 28 games and picked up a goal and two helpers at that Ivy League institution last year.

“So we obviously added some size with Sinard and Crowder, and those are two guys that are really difficult to play against, from what we’ve seen out of them in practice, and a guy in Daschke who can really move the puck,” Hutton said. “All of the guys that have come in on defense have made an impact and an impression so far in practice, and obviously we have our returners that we’re going to look to for experience and help show the younger guys the way. We’ve all had the privilege of having guys like that in our freshman years that we’ve looked up to and learned a lot from. I’m excited about the group.”

This corps helped Miami hold opponents to 27.2 shots per game in 2017-18, but too many were high quality. They also need to help tighten up a penalty kill unit that killed just 78.0 percent of its chances, ranking 46th in the NCAA.