Miami holds off UND for split

OXFORD, Ohio – Not only did Casey Gilling score the goal that put No. 19 Miami ahead for good, he assisted on the other two RedHawks tallies. 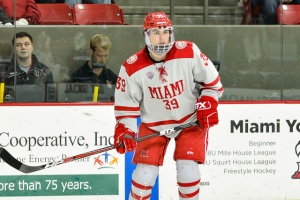 The sophomore’s three-point night powered MU to a 3-2 win over the No. 11 Fighting Hawks at Cady Arena on Saturday as the teams split their two-game weekend series.

RECAP: With 6:01 left in the first period, Gilling fired a shot from the right wing that hit off a skate and caromed to Josh Melnick at the left faceoff circle, and Melnick roofed it to give the RedHawks the early lead.

The Fighting Hawks’ Jordan Kawaguchi tied it when he took a one-time pass from Jasper Weatherby and whipped it past Miami goalie Ryan Larkin from the right faceoff circle just 3:38 into the third period.

That goal came seconds after Larkin had made a highlight-reel stop on a one-timer from the slot.

The RedHawks took the lead for good when Gilling deflected a blue line wrister from Derek Daschke with 10:23 left in regulation, giving MU a 2-1 lead.

Gilling fired a pass to Karch Bachman on the left wing, and Bachman blew past the defense and fired a shot under UND goalie Adam Scheel with 3:40 remaining, extending Miami’s lead to two.

The Fighting Hawks (5-3-1) cut the deficit to one with 22 seconds left as a wrister by Matt Kiersted hit Miami’s Brayden Crowder and bounced to Kawaguchi for his second goal of the night.

Kawaguchi had not previously scored this season.

STATS: Gilling’s three points ties a career high and he earned two assists for the first time in his career.

It was the third goal in six games for Melnick, and Bachman found the net for the first time in eight contests.

THOUGHTS: Miami came out flat to start Friday but did not have that issue in this game.

The RedHawks earned this win against one of college hockey’s flagship programs during a supposed rebuilding year.

This is the biggest quality victory for Miami this season, which has seen MU beat a lot of downtrodden teams.

— And the crowds are coming back. This was the best of 2018-19 in terms of numbers and intensity, and UND’s vocal contingent helped build this rivalry.

Miami’s so-called rebuild for this season seems to be happening more quickly than anticipated.

— Phil Knies was injured on a hit along the boards, and he may miss some games to a resulting upper-body injury.

FORWARDS: B. Much better puck possession by this corps than Friday, when UND put on a clinic. We mention the top guys all the time, but Zach LaValle has really stood out in his opportunities. River Rymsha jumped up from the blue line to anchor the Melnick-Gordie Green line.

DEFENSEMEN: C+. North Dakota generated a lot of scoring chances against the defense corps, not surprising considering the Fighting Hawks’ resume. With Knies being injured, Brayden Crowder and Andrew Sinard played together for a 13-feet, 1-inch pairing, and both stood out. Crowder made multiple key defensive plays with his stick and Sinard used his backside to impede opponents and shut down a UND breakaway with his backchecking.

GOALTENDING: A-. Larkin stopped 36 shots, and the the two goals he allowed were on a cross-crease one-timer and a fluky bounce off a blocked shot. Seconds prior to the first UND goal Larkin flashed the pad on a 2-on-1 for his best save of the season.

LINEUP CHANGES: LaValle was back in up front and Sinard was in the lineup as the extra skater.

F Carter Johnson and D Chaz Switzer did not dress.

FINAL THOUGHTS: Miami has played one-third of its games and has a record of 8-4.

Yes, the team schedule hasn’t been as strong but any sane person would’ve taken a .667 winning percentage to this point if asked about it prior to the season.

Miami has also brought its recently-dormant crowd back into the mix, giving it another advantage as the RedHawks enter the crux of their schedule.