Like Friday, every time No. 1 St. Cloud scored, Miami answered, resulting in a 2-2 tie in the series finale at Cady Arena on Saturday.

And this time, the RedHawks (9-6-3) picked up the extra conference point, as Josh Melnick batted home a one-timer in the 3-on-3.

Both teams were assessed a major and game misconduct courtesy of review, and each netted a goal because of the call.

Miami, which has completed exactly half of its 36-game schedule, does not play again until a home exhibition vs. Guelph (Ont.) on Dec. 30. The RedHawks head to Providence on Jan. 3-4 for their next regular season action.

RECAP: Just 22 seconds into a major power play, St. Cloud’s Blake Lizotte beat goalie Jordan Uhelski in the slot with 5:10 left in the first period after a pass from teammate Easton Brodzinski caromed to him off a Miami skate.

The RedHawks tied it when a point-blank shot by Ryan Siroky pinballed through the crease to MU’s Casey Gilling, who chopped it across the goal line 5:46 into the middle stanza.

Just 22 seconds into the third period a puck floated loose at the side of the net following a wrister from the blue line, and Easton Brodzniak backhanded it home to put the Huskies ahead, 2-1.

Miami capped the scoring with exactly nine minutes left in regulation, as Scott Corbett tapped home a puck at the side of the net off a shot from the outside of the faceoff circle by Melnick.

After five minutes of overtime, the game was officially ruled a tie, and Melnick wired home a one-timer on the ensuing 3-on-3 to earn the RedHawks the extra point.

STATS: Rourke Russell led Miami with two points on a pair of assists. It was Russell’s second career multi-point game, with the other coming vs. Denver on March 2.

— Gilling and Corbett both scored for the second straight game. Gilling has four markers in his last seven.

— Miami flipped its woeful faceoff numbers from Friday, going 36-25 on draws led by a 17-11 record by Josh Melnick.

— Melnick’s assist was career point No. 99. He is one point away from becoming the 52nd skater in Miami history to record 100 points.

Miami has a crushingly long break coming up, so tying the top-ranked team in college hockey twice has to give the team serious momentum heading into Christmas break.

It was another amazing game to watch and another testament to the RedHawks’ resilience. 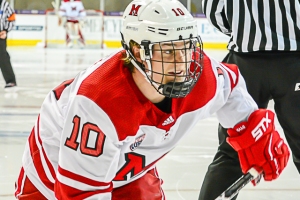 Again, against the No. 1 team in college hockey.

— Ben Lown was absolutely everywhere in this game. He did it all – penalty kill, stick handling, passing, winning boards battles despite his diminutive size.

— So River Rymsha was assessed a cross checking major after a skirmish, and St. Cloud scored. Same happened when Jonathan Gruden was buried and a minor was flipped to a 5-and-10, resulting in Gilling’s goal.

This is the new norm for college hockey, so players need to remain on alert. Everything is reviewable, so don’t do anything your mother would disapprove of.

Don’t agree with giving players the boot for fringe majors but the bar has been set so players best keep their cool.

— Attendance was 2,615. Yep, for the top team in D-1. Come on, we can do better. Get to the rink for these all-important contests or give your tickets to someone close by who can make the games.

— Karch Bachman continued to generate scoring chances as a result of his speed. Several times this weekend Miami launched fly pattern passes to see if he can chase the puck down. 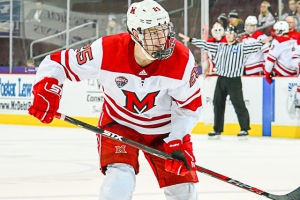 His power play passing was markedly improved in this one, as he occupied one of the points and tried to feed passes into the slot.

— Corbett had a strong weekend, scoring in both games and nearly adding another on a breakaway. His game is more physical, but his offense is welcome as he plays on the top line.

FORWARDS: B-. Not quite the offensive results from Friday but the effort was still there. Loved the effort from Lown, and Brian Hawkinson seemed to gravitate toward the puck as he generated three shots and blocked two. 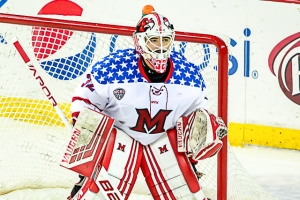 DEFENSEMEN: B+. Helped cut the SCSU shots down to 30. Have we mentioned St. Cloud entered the weekend the top-ranked team in Division I?

GOALTENDING: A-. Uhelski was 22-for-23 the final 45 minutes and was a major reason Miami was able to earn a pair of ties this weekend.

LINEUP CHANGES: All 19 skaters from Friday were in the lineup again on Saturday.

Larkin was the lone change for the RedHawks, who started Uhelski in net.

FINAL THOUGHTS: This fall it has been more fun to come to the rink than it has been since 2014-15.

Players are holding their own against top-level competition, and this team is bonding better off the ice than in previous seasons.

It’s been an enjoyable first two months, and hopefully the RedHawks’ vigor will continue following an extended break.