Especially considering the state of the Miami hockey program in mid-March, the first half of the 2018-19 season has to be considered a major success.

Following the RedHawks’ third straight first-round exit from the NCHC Tournament and subsequent dismissal of both assistant coaches, Miami received zero consideration as a preseason top 20 and was picked to finish last in its conference.

But the No. 16 RedHawks have stuck it to critics, as they enter the back half of their regular season schedule three games over .500, their best pre-January mark in four years.

The two coldest-weather months have been problematic for Miami in recent seasons, choc with top-10 in-conference matchups and long road trips.

BoB takes a look at five things Miami needs to do to qualify for the NCAA Tournament.

1. Better special teams. The RedHawks are in the bottom half of the NCAA in both power play and penalty kills, with a 16.4 percent efficiency rate on the man advantage and a 79.4 percent PK clip. They have just four PPGs in their last eight games and are just 14 of 21 on penalty kills their last five contests (66.7 percent). Miami has tried pretty much every one of its skaters on the man-advantage and still needs to improve its chemistry.

2. Less time in the defensive zone. Teams have set up camp in Miami’s third of the ice at times and obviously it’s counterproductive to have your best players chasing the puck in their own zone for a minute or more.

3. Better road play. The RedHawks are a stellar 6-2-2 at Cady Arena but are 2-3-1 on opponents’ campuses and 1-1 on neutral ice. And with the exception of Providence, those road foes were not among college hockey’s elite – Colorado College, New Hampshire and Omaha plus Mercyhurst in its home city. Miami has scored just 18 goals in eight games away from Oxford. And we documented the RedHawks’ recent road struggles in the second half above.

4. Cut out the major penalties. The NCAA has made its point: The bar for five-and-a-game has dropped significantly, and three guys who are not cheap-shot artists in the least have all been booted from games this season.

Now, five reasons to be optimistic about MU’s second half: 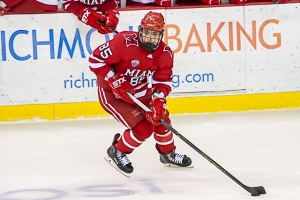 1. Effort. This team does not quit, and there’s no reason to believe it will during the stretch run of the regular season. That attribute was exemplified during Miami’s last series, a pair of ties vs. No. 1 St. Cloud State during which the RedHawks fell behind by one goal six times and rallied to even the score each time. Karch Bachman has been one of the leaders in this area, as he has parlayed his game-changing speed with a suburb compete level, resulting in him leading the team in goals with seven and generating multiple scoring chances almost every game.

2. Goaltending. Throw out last season’s numbers for Ryan Larkin. He was voted team MVP as a freshman and is even better in 2018-19, boasting a 1.89 goals-against average and .936 save percentage – which is five whole percent better than his sophomore year when he finished at .886. Part of the credit belongs to Jordan Uhelski, who has performed well when called upon and was a game saver in both ends of the St. Cloud State series. Uhelski has a .915 save percentage but as importantly the graduate senior has also helped push Larkin, who did not have a similar foil last season.

3. Freshmen are improving. Derek Daschke is clearly the freshman MVP of the first three months of the season, as he leads that class in points (3-9-12) and has been exceptional in his own end as well. And he continues to improve on seemingly a nightly basis. Scott Corbett is thriving in his grinding role while wielding a quality shot that has netted him three goals, and he stood out vs. SCSU. Same with Brian Hawkinson, who is 1-6-7 and has been a better forward than those stats indicate. Monte Graham is a faceoff stud and is starting to demonstrate skills in other areas. Big D-men Bray Crowder and Andrew Sinard also seem to be adapting to the college game. Jonathan Gruden (1-6-7) is raw but has tons of upside and could take off once the calendar flips.

4. A healthy Knies? Phil Knies suffered an upper body injury at Cady Arena on Nov. 10, so Knies should be nearing a return. The sophomore will have missed seven weeks by the time the second half starts with the puck drop in Providence. Knies has been a critical part of Miami’s offense, scoring 11 times as a freshman and posting three goals in 12 games this season.

5. The defense corps is deeper. Daschke’s presence is huge, and River Rymsha has been a pleasant surprise, forcing himself onto the lineup card each night with his impressive two-way play. Crowder has dressed for all 18 games, and Sinard has seen the ice six of the last seven games. With sophomores Rourke Russell and Alec Mahalak earning regular spots, that has severely curtailed the number of starts for Chaz Switzer and Grant Frederic, who were decent five and six defensemen last season. Of course, standout and captain Grant Hutton leads this corps with a skill set that will likely land him in the NHL within two years.

After a Sunday exhibition vs. the University of Guelph (Ont.), Miami heads to No. 10 Providence. The RedHawks were already shut out by the Friars on neutral ice in October. Then it’s off the Kalamazoo to face No. 17 Western Michigan.

Back home for a pair against Colorado College and two vs. No. 4 Minnesota-Duluth.

Miami then heads to No. 1 St. Cloud State, followed by a home series vs. Omaha before its one off week of the second half.

A look at the final 18 regular season games:

All eight teams have played eight out of 24 league games, or one-third of their conference slate, and Miami is currently tied with Denver for that all-important fourth spot.

The four spot is crucial because it’s the final home-ice slot for the NCHC Tournament. Miami has not hosted a league tournament series since 2015 but has a legitimate shot this winter.

Miami played well overall the first half of 2018-19, better than many expected.

The challenge of course is for the RedHawks to sustain that level of success during their annual murderer’s row of opponents in the winter months.

But heading into the pressure cooker three games over .500 and playing with the type of intensity Miami has exuded the first three months, returning to the NCAAs is now a real possibility.