OXFORD, Ohio – It was a fitting end to a dreadful January for Miami.

Kristian Blumenschein blasted home a one-timer from the high slot on a 5-on-3 with 3:12 left in regulation, lifting Colorado College to a 3-2 win over the RedHawks at Cady Arena on Saturday. 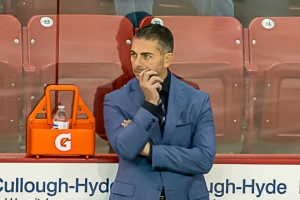 The game ended with MU coach Enrico Blasi drawing a game misconduct for confronting the officials after the game.

That bench penalty could carry a suspension.

RECAP: Colorado College (10-12-3) took the lead just 3:54 into the game when Trey Bradley kicked a pass back to a wide-open Ben Israel in the high slot, and Israel trapped it, wound up and wired it over the glove of Miami goalie Jordan Uhelski.

The RedHawks tied it when Scott Corbett carried the puck across the blue line on the right wing, dragged it to the top of the faceoff circle and wristed it inside the far post with 1:50 left in the opening stanza.

Miami took the lead, 2-1 when Derek Daschke snuck a wrist shot through traffic on the power play with 7:35 left in the second period.

But the Tigers tied it 86 seconds into the final frame when Alex Berardinelli emerged from along the boards with the puck, slid a pass through the slot to a wide-open Cole McCaskill, who snuck in on the back door for a tap-in goal.

The RedHawks’ Casey Gilling was whistled for interference to give Colorado College the decisive power play. Miami went down two men when Andrew Sinard kicked a CC skater’s stick as he reached for it.

Blumenschein ripped his shot over the glove of Uhelski off a feed from Mason Bergh to put CC ahead.

Following the goal, Blasi grabbed a Miami stick and wound up to throw it on the ice but instead shattered it on the boards.

After the game Blasi and referee Scott Bokal jawed at each other at the Miami blue line, sticking their fingers in each other’s faces.

— Gilling picked up an assist, giving him points in consecutive games.

— Miami did win 62 percent of its faceoffs (31 of 50) after struggling mightily in that area much of this month.

— Now the bad: The RedHawks slipped to 1-21-6 the past three seasons when pursuing their 10th win.

— The RedHawks took the lead and held it for 8:01. It was the first time MU had led at any point in seven games.

The penalty on Sinard was crucial, and it nearly gave Blasi a coronary.

So a quick summary:

* With the score tied at two, Sinard was whistled for interference at 15:17 of the third period, setting up a 1:23 two-man advantage.

He didn’t do the “distinct kicking motion”, the term hockey throws around when pucks hit skates and result in goals, but made no attempt to avoid the stick.

* Did he do it deliberately? Unclear. He was heading to the bench and maybe he didn’t see it. If someone held a gun to my head and made me pick a side, I’d say he probably knocked it away on purpose. Technically that’s a penalty.

However, the bar is almost always higher when putting a team down two skaters, which results in a goal against a substantial percentage of the time.

* Also, these officials had called a total of two penalties on Friday – one to each team – and just three each prior to Gilling and Sinard’s minors.

* Blasi was also outraged that the officials didn’t make the proverbial make-up call when Grant Hutton was bumped seconds before the goal, but there wasn’t much contact there.

* Were Blasi’s antics following the goal on the bench and also after the game, rehearsed? Knowing him, probably not. It was more likely a frustrated coach losing his mind after a winnable game slipped away.

But even if it was, I think it’s a good thing he lit them up. This team seriously underachieved this month and someone or something needed to fire Miami’s players up.

Especially with a series at St. Cloud looming next weekend.

* For the record, the last time Blasi was kicked out of a game was Feb. 13, 2010 in a 10-2 rout at Bowling Green that also featured one of the team’s most memorable skirmishes.

* The Call – and resulting goal – was a huge part of the game, no doubt, but there are plenty of other questions about how this game flipped from a win to the ‘L’ column.

How did Miami end up with four shots in the third period against a team that had allowed 24 goals in its previous seven games?

Why is Gilling taking an interference call an area code away from the play to initiate that power play?

Why did the entire team flood the left wing in the second minute of that final frame, allowing a wide-open McCaskill an uncontested tap-in to tie it?

Why didn’t Phil Knies bust it on the left wing earlier in the 3-on-5 when Miami had a 2-on-1 to create a better scoring chance?

It was a hard way to lose, no doubt, but there were many other factors that went into this loss than merely a controversial interference call.

— What a crazy shift for Scott Corbett in the second period. He nearly scored, held off several Colorado College defenders along the boards and had the puck roll off his stick for a 2-on-1 the other way before obliterating a Tigers skater at center ice and drawing a retaliation penalty.

That power play culminated in Daschke’s goal, and Corbett scored the other one in the first period.

— It’s probably a little less than 50/50 that Blasi is suspended, and if he is it would likely just be for a game, but any announcement would likely be made on Monday.

FORWARDS: C-. A little more life than Friday but not enough. The creativity of Gordie Green and Karch Bachman has been completely stymied by defenses for weeks and Miami isn’t deep enough up front to have its top scorers held off the scoresheet for long periods of time. Corbett figured in both goals (although he didn’t get a point for the second one), and Gilling and Jonathan Gruden earned assists. Gruden’s father, NY Islanders assistant John Gruden, was in attendance because of the All-Star break.

DEFENSEMEN: C. This corps did clean up its play substantially over Friday but is still allowing too many quality chances. No one picked up the trailer on the second CC goal (Bray Crowder and River Rymsha were on the ice) and the Tigers ended up with at least 10 shots in each period.

GOALTENDING: B. The first goal snuck through traffic, the second was a slam dunk and the third was a rip from the high slot. Maybe Uhelski could’ve stopped the first or last, but he made a radical save on a 2-on-1 (Corbett’s shift, see above) and stopped 31 shots overall and was outstanding at controlling his rebounds.

LINEUP CHANGES: Just one among skaters: F Carter Johnson was back on the ice, replacing Zach LaValle.

LaValle had played the previous three games and Johnson had sat the prior two.

Uhelski started for the third time in five games and relieved Ryan Larkin in the other two.

He has been the back-up most of this season but is the hotter of the tandem right now, so it will be interesting to see how much he plays the final 10 games of the regular season.

Co-captain Josh Melnick remains week-to-week with a lower body injury, as he missed his sixth straight game. There’s a very good chance he returns next weekend.

Chaz Switzer was in the stands wearing a boot and fellow D-man Grant Frederic is also out with a lower-bod injury.

SCHEDULE: Miami heads to No. 1 St. Cloud State next weekend. Its other remaining road contests are against No. 4 Denver and No. 5 Minnesota-Duluth.

The four home games left on the RedHawks’ schedule are vs. Nebraska-Omaha in two weeks and No. 13 Western Michigan to wrap up the regular season.

STANDINGS: Colorado College entered the weekend needing all six points to pass Miami for sixth place in the conference standings, and the Tigers swept them all.

At 3-9-2, the RedHawks are currently seventh in the NCHC, just one point ahead of last-place Omaha.

Miami has dropped to No. 35 in the PairWise and are now a major longshot for an at-large bid to the NCAA Tournament.

FINAL THOUGHTS: The question becomes: If Miami can’t beat Colorado College – playing its eighth and ninth straight road games – in its own rink, how many more wins will the RedHawks get?

Their six remaining road games are brutal. Omaha is beatable but Western Michigan is ranked No. 13 and swept the RedHawks in Kalamazoo.

Those seven and eight seeds are death sentences, with best-of-3s at St. Cloud State and Minnesota-Duluth in those teams’ rinks, so Miami really needs to figure out a way to earn enough points to get out of this hole.

The disturbing thing is we’ve gone from wow, this team could fight for home ice and an NCAA berth to, OK, curb expectations because this is still a pieced-together team to for the love of God, Miami just got manhandled at home by the last-place team in the league — all in a span of 22 days.

And now we’re questioning this team’s compete level, something that was never an issue in calendar year 2018.

So what happened? Miami was going so well against St. Cloud, when the RedHawks tied the Huskies twice at Cady Arena to cap off the first half of the season.

The loss of one of the captains is huge, no doubt, but that doesn’t explain not showing up for Game 1 of this series and blowing Game 2 in the third period against a CC team that had two previous conference wins.

Hopefully the RedHawks’ coaching staff has the answer and solution, because it’s hard to be optimistic about Miami’s chances next weekend when the team is 0-8-4 in its last 12 and is visiting the top-ranked team in Division I.

And at this point the RedHawks’ odds of advancing to the Frozen Faceoff and beyond for the first time in four years are looking equally bleak.