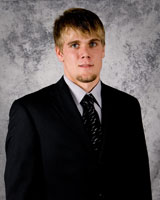 According to the St. Cloud Times, Indiana Ice defenseman Joe Hartman has committed to Miami University. The blog post didn’t mention when Hartman would arrive at Miami. Through five games this season, he has one goal and three assists and is a + 3.

Apparently, several WCHA schools, including St. Cloud State in his hometown were interested in him. One would have to think that Jeff Blashill put in a good word for the RedHawks as well.

Joe currently plays with “RedHawk to Be” Max Cook in Indiana.

UPDATED: Here is an article from the St. Cloud Times from this morning that confirms Joe will be joining the Miami hockey program in 2009.