OXFORD, Ohio – A 2-1-1 record to start the season with one point from Anthony Louis and Sean Kuraly you say?

The RedHawks’ two top returning scorers are off to slow starts offensively, but the RedHawks (2-1-1) swept Ohio State this weekend, 3-2 in Columbus and 3-1 in Oxford the following night with five of its goals coming by freshmen.

Rookies have potted seven of 11 Miami goals for the season. Four of the five freshmen forwards have found the net in the team’s first four games. 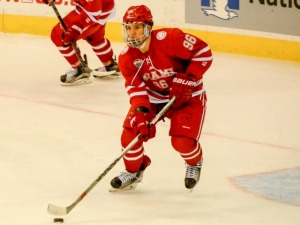 Beyond Jack Roslovic, it was unclear entering the season how much newbies would contribute offensively to a forward corps that had lost Austin Czarnik, Riley Barber and Blake Coleman among others. But at least for two weekends, the answer is significantly.

Overall, Miami hasn’t set the world on fire from a scoring perspective, averaging 2.75 goals per game. But the RedHawks missed several Grade A scoring chances in the first period alone on Friday and had multiple chances on Saturday it should’ve cashed in.

MU finished the finale with 41 shots on goal and missed the net a number of times.

There is cause for optimism regarding this team’s offensive potential. The RedHawks are holding their own during what most knew would be a transition process with numerous new faces taking over the jobs of established studs.

If they have been able to hold their own during their growing pains without contributions from Kuraly or Louis, just wait until those two hit their strides.

And they will hit their strides, hopefully very soon.

Other thoughts on Saturday:

– This was the best all-around game Roslovic has played. He engaged in battles along the boards and was generally more of a presence on the ice than in the previous games. Roslovic also showed more of ability to make defenders look silly as he can seemingly skate around them at will, a feat made even more amazing considering he is still just 18. That won’t fly at higher levels, or even against better college opponents, but he is certainly showing everyone why he was a first-round pick this summer.

– Sherwood seems to get better every game. He blew up in the USHL last season, scoring 29 goals after netting 13 the previous season, so hopefully that will translate at this level – it certainly did on Friday when he picked the top corner on his first college goal. And it looks like he could do more, as he engages physically and appears capable of playing both ways. Josh Melnick and Roslovic have been the obvious standouts early, but Sherwood looks like he may develop into a very good player for Miami as well.

– The power play was 1,000 percent better on Saturday than Friday. Yes, Miami went 2-for-5, but beyond that, the puck movement was outstanding and the communication appeared much improved. The first unit could be devastating to opponents this season with Roslovic-Melnick-Louis-Kuraly-Belpedio, and its makeshift second unit scored the final goal on Saturday, with Zach LaValle finding the net.

– Miami’s four-game road stand will be difficult but should provide a bonding opportunity and could make the team better overall. At least the RedHawks get their feet wet on a real road trip – not like Ohio State, which was an up-and-back drive with more Miami fans than OSU fans in attendance – before opening conference play in two weeks.

FORWARDS: B+. At this point of the season, improvement is more vital than results, and the improvement is there. The freshmen are getting better. Louis played well but only had a point, and many more will follow. Kuraly has struggled at times early but appears ready to break out. If either Kevin Morris or Alex Gacek ever find the net they may be unstoppable – both have done everything right except finish in the first four games. Overall, this unit fired a ton of shots and missed the net a bunch more. They played pretty well defensively as well, but the competition will get a lot stiffer very soon.

DEFENSEMEN: A. This unit made mistakes the first three games, and many were costly. That really didn’t happen on Saturday. We mentioned Louis and Kuraly and how they will get going eventually, and Louie Belpedio belongs on that list as well. His best hockey is yet to come. Senior Matthew Caito was outstanding, as he shut down seemingly every OSU threat on his watch, and classmate Chris Joyaux is playing some of the best defense of his career right now. Like with the forwards, the process is in place, which is very encouraging, and the opponents will get better from this point forward. 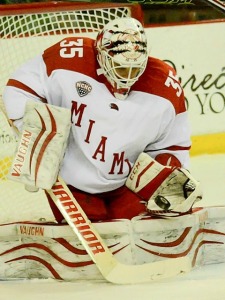 GOALTENDING: A. Senior Ryan McKay hasn’t played a lot of back-to-back nights, but he shined in this one. He appeared to be screened on the only goal against, and he had to shut down a couple of high-percentage chances, including a breakaway. McKay finished 27 of 28 (.964) on the night and 52-for-55 (.945) on the weekend. This team’s prospects are a lot higher if McKay can continue to play at this level.

LINEUP CHANGES: Senior Michael Mooney was back in at forward on Saturday, replacing junior Devin Loe, who did not have a point in his first three games. On defense, sophomore Scott Dornbrock was scratched for the second time this season, as junior Colin Sullivan returned to the lineup sheet. McKay started for the third straight game.