NOTES: Miami has dominated this series in recent years, but Ohio State is ranked No. 15 in the USA Today poll and 19th in the USCHO.com rankings.

The Buckeyes are coming off a 3-2 win over then-No. 3 Denver in Denver and a 3-3 tie vs. Air Force in the Ice Breaker last weekend. 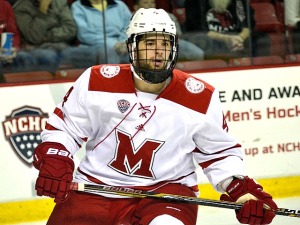 Senior Christian Frey started both games in net last weekend, but classmate Matt Tomkins relieved him in the second game, stopping all 10 shots to salvage the tie.

Based on that, it would appear likely Tomkins would start between the pipes in this game. He is 16-21-5 with a 3.24 goals-against average for Ohio State. He has struggled vs. Miami with a 4.05 GAA in four games while Frey allowed two goals in his lone appearance vs. the RedHawks.

The Buckeyes are a balanced team in terms of class size, with seven seniors, seven juniors, nine sophomores and five freshmen. Three rookies played in both games last weekend and another dressed once.

Normally these teams play a home-and-home series the same weekend, but this season they meet in Columbus on New Year’s Eve, likely to break up a long Christmas break for both.

In one of their most complete games of the season, the #7 Miami RedHawks went into the Herb Brooks National Hockey Center in St. Cloud, Minn. and handed #3 St. Cloud State their first loss of the season shutting out the Huskies 2-0.

The win was significant as it was St. Cloud that knocked Miami out of last year’s NCAA tournament winning a 4-1 Midwest Regional final in Toledo in front of a crowd that would make duhOSU’s crowds at Cheap Furniture Arena look huge.

Miami got on the board first about halfway through the first period as freshman defender Matt Joyaux recorded his first collegiate goal on a nifty pass from junior Alex Wideman. After Miami won a puck battle at the SCSU blueline, sophomore forward Sean Kuraly muscled the puck into the offensive zone where Wideman collected the puck along the boards and centered a pass to a trailing Joyaux who one-timed a low shot on the ice past Husky goaltender Ryan Faragher for what turned out to be the game-winning goal.

Sophomore Ryan McKay makes one of his 31 saves in a 2-0 Miami victory. (Miami University Athletics)

In the third, Miami collected an insurance marker as sophomore Riley Barber connected on his ninth goal of the season by firing a wrist shot off a draw in the SCSU end. Junior captain Austin Czarnik won the draw cleanly and directly to Barber, and he made no mistake ripping a shot past Faragher on the far side.

Sophomore netminder Ryan McKay made 31 saves to record his second consecutive shutout and sixth of his career and the Miami penalty kill went 5-for-5 and forced many of the SCSU chances to the outside though the Huskies certainly had their share of good scoring chances, but were simply unable to find the back of the net. Miami will still need to focus on limiting chances down low tonight and for the rest of the season as the young defense corps continues to grow.

“It was a great team effort, our most complete game all season,” said McKay. “We blocked a ton of shots (17). We weren’t blocking a lot of shots at the beginning of the season.”

“The size of the ice helps us,” McKay said of the Olympic-sized sheet at the Herb Brooks National Hockey Center. “We’re similar teams in a lot of ways. I thought our ‘D’ kept their position on the dots and kept stuff to the outside,” he said. “And when we needed to, we collapsed and won battles in the tough areas.”

Miami and St. Cloud will finish the two-game NCHC series tonight from the National Hockey Center. Faceoff is at 8:07 PM EST and the game can be heard via Miami All-Access. The Huskies also offer a pay video feed from their website, scsuhuskies.com.