The first 2 NCHC games are in the books for the Miami RedHawks. There were ceremonial puck drops, plenty of firsts and two evenings of exciting hockey. 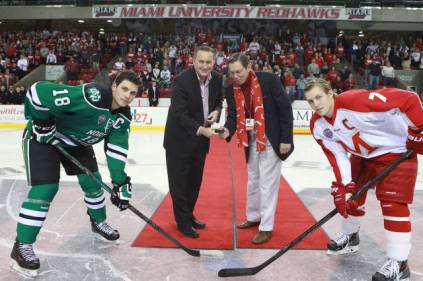 6th ranked North Dakota took Friday night’s game 4-2 on the strength of 2 goals from Brendan O’Donnell and 35 saves from goalie Zane Gothberg. Jay Williams blocked 21 of 25 shots, but was victim of a couple of bad bounces and bad breaks by the end of the night.

The first 2 goals on Friday night were partly the cause of bad bounces, and especially the second goal. The second tally for UND was fired from the point and sailed high over Jay Williams’ head. The puck hit solidly on the back glass and rebounded to hit him directly in the back before rolling into the net.

Miami would go down 3-0 with just 14 seconds gone in the second period, but would fight back later in the frame. Sean Kuraly put in a rebound and Anthony Louis snuck one through Gothberg’s legs to pull within 3-2. Miami carried much of the play in the second half of the game, but a low shot from the point hit Austin Czarnik’s stick in the slot and rocketed over William’s shoulder for the nail in the coffin.

Saturday night started entirely differently for the RedHawks. Gothberg had been pulled after allowing 4 goals in 24 minutes of play. Backup Clarke Saunders allowed a shot on his first save attempt and it was Miami 5 and North Dakota 0 in seemingly the blink of an eye. On the night, Miami fired 40 total shots, had 9 of them blocked and fired one off of the post. On the other end of the ice, Ryan McKay stopped 34 of 36 shots on the night.

3 Stars of the Weekend

3. Jimmy Mullin was absolutely on fire on Saturday night. It’s not to say he played poorly on Friday, but Saturday he was a different skater altogether. His speed was on display all night and he was flying past UND defenders on almost every shift. He finished the night with 2 assists and 4 shots, helping Blake Coleman on his 2nd and 3rd goals of the night. Jimmy looks great so far this year after suffering a knee injury in the 2013 NCAA tournament that knocked him out of the Regional Final against St. Cloud State.

2. Your number 2 star is the head coach once again. Enrico Blasi made some changes from the first game to the second game of the series. These timely lineup moves, detailed below, proved to be very significant and helped to propel Miami to the win. Perhaps more importantly, it also prevented the sweep.

It seemed as though on Friday night Blasi decided to go with muscle and size against UND, but switched it up to go with speed on Saturday night. The move paid off as Miami got their first ever win over North Dakota.

1. Blake Coleman scored a hattrick on Saturday night. The hattrick was the first of his career and the first ever in the NCHC. Goals 2 and 3 came just 14 seconds apart, and he nearly scored a 4th goal only a couple of shifts later. He also won 8 of the 12 faceoffs he took. Two side notes here:

Thanks again for reading, and we’ll see you next weekend!