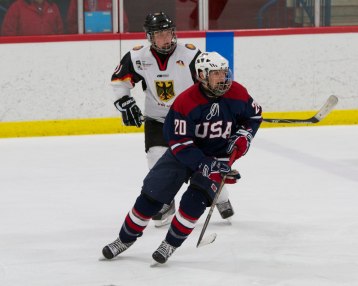 According to his personal Twitter account (@rsiroky24), ’95 birthday and California native, Ryan Siroky (5’11”, 180), has verbally committed to play his college hockey at Miami. Siroky spent 2010-11 with the LA Junior Kings (LA Selects) where he posted 14-20-34 in 35 games and part of last year with the NTDP. Siroky has spent this year with the LA Selects Midget AAA 16U team and played three games with the Green Bay Gamblers of the USHL as they drafted him over the summer. Presumably, he’ll move up to the Gamblers next year as a “full fledged” 17-year old.

In August, Siroky led all U.S. Junior Select players at the 2011 U-17 Five Nations Tournament in Ann Arbor with three goals three assists as the Americans swept their four games to win the tournament going away.

Since he just turned 17 in February, Miami fans shouldn’t expect to see him on campus until at least the 2013-14 season and perhaps even the following year depending on his development and Miami’s needs.

Congratulations, Ryan! And, welcome to The Brotherhood!

Here’s a rundown on Ryan and the rest of the U-17 team from the United States of Hockey.

Siroky got better in every single game he played and ended up tying Oglevie for the team lead with six points (3-3). He plays hard every shift and had good finish when he was near the net. He was blocking shots, playing physical and never missing a beat offensively. He became more and more of a factor in each game. He’s a fun player to watch. Draft eligible in 2013

WCPO.com’s John Lachmann had a great report on future RedHawks Alex Gacek and Sean Kuraly as they play in the USHL for Youngstown and Indiana, respectively. Great to see even more skill heading to Oxford this fall (assuming Gacek is in the fold for 2012-13). John does a tremendous job covering the RedHawks including his frequent visits to see the Ice play. Miami’s pipeline to the Ice was solidified after former Miami assistant and current Red Wings assistant coach, Jeff Blashill became the head man in Indianapolis.