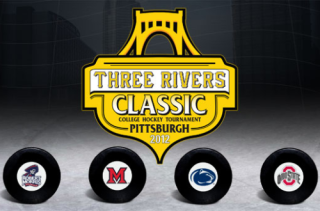 Despite two of Miami’s heralded freshmen (Riley Barber and Sean Kuraly) playing in the World Junior Championship in Russia this week, the #5 Miami RedHawks (11-3-4, 8-3-3-3 T1st CCHA) return to action to face a familiar foe, the Ohio State Buckeyes (7-6-5, 6-3-3-1 4th CCHA) Friday at 7:30pm in the second game of the Three Rivers Classic in Pittsburgh. Miami tied and defeated the Buckeyes in the final two games before the two-week winter break at Cheap Furniture Arena in Columbus on December 14 and 15. Friday’s game will be the RedHawks third consecutive game against their in-state rivals who will meet at least five times this year. This game will not count in the overall CCHA standings as this will be considered a non-conference affair.