OXFORD, Ohio – Starting goalie Ryan Larkin logged 20 scoreless minutes, the Green-Melnick-Bachman line is a quasi-permanent thing and no one got hurt.

Those are the headlines from Miami’s 8-2 exhibition win over the University of Windsor at Cady Arena on Saturday.

To address the relevance of this meeting first though: This game was a well-scheduled tune-up for the RedHawks, whose last game was three weeks ago.

That’s a long time to go between contests in any sport. Plus in recent years, Miami has struggled in the games immediately following Christmas break.

This way, the RedHawks could get its regulars ice time and allow others to earn experience by logging valuable minutes as well.

The downside to NCAA-CIS (Canada’s version of the NCAA) matchups is CIS teams play more of a pro style of hockey. Meaning half-shields instead of cages and more importantly, an increased tolerance of chippiness.

That addresses the final headline point: No one gets hurt, and additionally, no one gets suspended.

It can seem like there’s little upside to these exhibitions.

Anyway, on Larkin: He played the first period, presumably to knock off any down-time rust. Good call by the coaches to keep him sharp without overusing him during a season he’s clearly destined to log almost all of Miami’s minutes between the pipes.

Chase Munroe played the second period, Grant Valentine the third, as both of Windsor’s goals were scored under Valentine’s watch.

Then there’s the first line: Karch Bachman joined Josh Melnick and Gordie Green at the end of the Cornell series, and they were together at Western Michigan and again in this game.

They combined for three goals and five assists, with each tallying at least two points.

Melnick recorded a game-best four points on two markers and a pair of helpers. 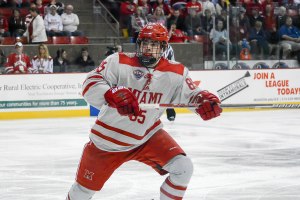 Bachman has blazing speed and a super-quick shot release, so he provides another sniper on the first line, and he has also moved into a penalty killing role this season. He is 3-6-9 this season after racking up just six points his freshman season.

Green and Melnick – should we call them Grelnick? – clearly make this offense go, and being the third member of their line is a privilege.

– To catch up: Decembers are tough in this part-time writer’s full-time vocational field, thus the lack of content here, but Miami split its final two NCHC games at Western Michigan, winning 5-2 on Friday and dropping a 4-3 overtime decision in the finale.

Saturday’s loss was tough to accept, as the RedHawks led 3-1 in the second player before allowing a natural hat trick – with the latter coming in overtime.

That was the second time in three weekends Miami saw a Saturday outcome flipped. The RedHawks also ended up tying Bowling Green on Nov. 25 on an extra-attacker goal with 38 seconds left.

– Miami is currently sixth in the NCHC with a 3-4-1 league record, although the RedHawks have played two fewer games than all of the top five teams. MU has completed its non-conference schedule, as its remaining 16 regular season games are all against league opponents.

– Perhaps the best news is that Miami is 17th in the PairWise rankings, which ultimately determine which teams qualify for the NCAA Tournament. In a 16-team Division I tournament with at-large bids, typically a PairWise rank of 12 or 13 is considered safe.

– Love the toughness from Chaz Switzer, who blocked a slap shot in the leg and returned after a brief stint in the locker room, and Conor Lemirande, who needed facial sowing after scoring a goal but returned.

– Also love the game-to-game improvement by Ben Lown. The freshman scored and picked up an assist.

– Miami had 21 skaters for this game, three more than is allowed in NCAA play, and forwards Christian Mohs and Zach LaValle and defenseman Grant Frederic were listed as the extra bodies. F Carter Johnson, F Alex Alger, D Bryce Hatten and G Evan McCarthy were the only RedHawks who did not dress.

– Denver’s up next. The Pioneers are No. 5 in the PairWise and second in the USCHO poll. Big two games in Oxford this Friday and Saturday.

In their only exhibition tune-up before the puck drops for real next weekend, the Miami RedHawks got two goals from “Awesome” Alden Hirschfeld and defeated the Windsor Lancers 4-1 at Steve Cady Arena.

Hirschfeld got his final season in a Miami uniform off to a fast start, and along with classmate Matt Tomassoni and junior Curtis McKenzie, provided all the offense senior goaltenders Cody Reichard and Connor Knapp would need as the RedHawks outshot Windsor 51-13.

Miami went 2 for 5 on the powerplay and surrendered one goal in six shorthanded situations as the game featured 21 penalties for 48 minutes. One night earlier, the Lancers skated to a 6-5 loss in Columbus as their game with the Buckeyes was also a chippy affair for the visitors from Canada who play their hockey in the Ontario University Athletics Conference.

The RedHawks skated without top returning goal scorer, Reilly Smith, but were able to overcome his absence in dominating lesser competition. If Smith is out for an extended period, Hirschfeld and the other upperclassmen will have to shoulder the load until his return.

Next weekend, Miami skates for real against Bemidji State of the WCHA in the first two regular season games of the year. We’ll have a season preview for the RedHawks as well as a weekend preview posted later in the week.

MURedHawks.com has a game recap HERE.