>One On One With Coach Blasi 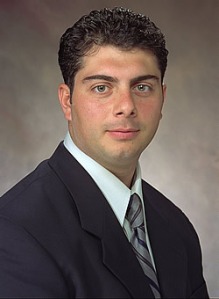 As it’s hard to find news during the off-season months, I recently had the chance to conduct an e-mail interview with Coach Blasi. Everything from the OOC schedule to the power-play is addressed. Hope you enjoy it! Feel free to send any feedback.

With the official beginning of the 2008-2009 season still more than a month away, light work for the RedHawk icers has already begun. For those curious as to how the off-season schedule works, Rico says that, with the exception of a month or so, the season…never really ends.

“The players all stay for the first summer term and workout as a team. This lasts from May through the end of June. Then, they have about a month and a half on their own; some stay, some go home, and some go to NHL developmental camps. We start individual practice sessions when the guys get back to campus to start school. Our official first day of practice is October 4. Last year, we chose to play an exhibition game on that day and we are doing the same this year. For the coaching staff, the off-season schedule consists of planning, recruiting, and camps.”

Planning
Planning is a topic of which the RedHawk coaching staff has undoubtedly become very familiar with since the season-ending loss to Boston College in the quarter-finals of the 2008 Frozen Four tournament. As the team was already prepared to lose seven seniors due to graduation, juniors Alec Martinez and Jeff Zatkoff both decided to forgo their final year of eligibility and sign with the Los Angeles Kings, the rights holder to both players. With the Martinez’ departure, the RedHawks lost four defensemen, three of which were a consistent presence on the blueline, leaving only seniors Kevin Roeder and Ray Eichenlaub, as well as sophomore Vincent LoVerde as the top 3 defensemen. While defensive pairings obviously haven’t been decided upon yet, Blasi says the returning RedHawk blueliners will have a lot on their shoulders and certainly expects Michael Findorff to be in the mix.

“No question, we’ll look to our returning guys (Roeder, LoVerde, Eichenlaub, and Findorff) for leadership and consistency,” said Blasi. “At the same time, we are extremely excited about our freshmen; a very talented group of Will Weber, Matt Tomassoni, Chris Wideman, and Cameron Schilling.”

Leadership
Another area where the RedHawks were hit hard in…more specifically, senior leadership. Gone are captains Ryan Jones and Nathan Davis and while it’s a very tough task to replace a presence like Jones both in the dressing room and on the ice, Blasi, once again, looks to the senior leaders to do just that-lead…and choosing a captain to replace Jones, Blasi says, wasn’t an easy decision.

“Brian Kaufman will be our captain and our only alternate will be Kevin Roeder. It’s a tough decision when you have so many great guys in the locker room.”

A New Face Behind the Bench
No, the new face behind the bench this season isn’t Jeff Blashill with a makeover. It’s new RedHawk assistant coach Brent Brekke. Brekke, who had spent the last several seasons with Cornell, replaces Blashill, who left Miami earlier in the summer to become the head coach/general manager of the USHL’s Indiana Ice. With Blashill now in the USHL, it could be surmised that more Ice alums could be wearing red and white during their college years. Regardless of where the recruits come from, Rico feels very good about his coaching staff- past and present.

“Blash did a great job for us and we wish him the best of luck,” Blasi said. “With Coach Brekke, I have used the saying “we just keep on running.” He is a well respected person and coach around the country and an excellent recruiter. We feel very fortunate to have him on the staff.”

Miami vs. North Dakota…regular season? Yes.
We’ve all either heard the comments, or made the comments about the out of conference schedule as of late. Once again this season, Miami will face RPI, and Vermont in weekend series’ and will see Clarkson in the Ohio Hockey Classic. Blasi has his take on the OOC schedule and to those who want to play bigger and better schools? Relax. It’s coming.

“Some of these teams will not travel to play and it’s very difficult to schedule with all the different leagues and very few open dates,” Blasi said. “With that said, Vermont is a top-20 program and Clarkson is a top-10 program. RPI is an extremely tough opponent and well coached. Then you add the cluster we are in with Michigan, Michigan State, and Ohio State and we may have one of the toughest schedules in the country. For our fans who say we should be playing the bigger schools, it’s coming. Have a little faith. We have North Dakota, University of New Hampshire, and St. Cloud State on the schedule in the next few years.”

Other Notes of Interest
-Rico feels very good about the power play over the past 5 years. He feels that it’s more important to score timely goals, while on the PP and for the most part they have done that.
-Expect a “competition” if you will, for the number one goaltender job. Rico also says that we will probably see both Reichard and Knapp early on in the season, much like he did with Effinger and Zatkoff in the past.