>RedHawks Move On To Motown! 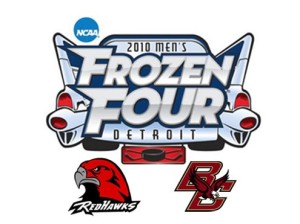 For those of you that watched the Miami RedHawks defeat the Michigan Wolverines in a double overtime thriller on Sunday night, there’s no need to recap it here. You know the story. The ‘Hawks now move on to the Frozen Four for the second straight year and will take on “tournament rival” Boston College on April 8th at 8:30pm ET at Detroit’s Ford Field. The Eagles advanced by beating Yale on Sunday, 9-7. Check back on the blog in the next week or so for an in-depth preview of the Miami/BC matchup. Wisconsin and RIT are also Detroit bound after their wins this weekend.
Notes/Thoughts:
– Defenseman Vincent LoVerde missed this weekend’s games because he is currently hospitalized due to an “unfortunate situation.” It’s unclear at this point if he’ll be available for the National Semifinals.
– Connor Knapp was spectacular. He made 55 saves on Sunday night and the Miami defense played well in front of him. In my opinion, Connor deserved to play that game and he showed why.
– Rico: Has anyone who has followed this program for any length of time EVER seen the man that emotional? No way.
– Boston College goaltender John Muse has allowed 14 goals in the last three games, seven of them coming against Yale in the 9-7 BC win on Sunday afternoon.

Posted on March 29, 2010, in Uncategorized. Bookmark the permalink. 4 Comments.