← Rough weekend, but the #SixPack lives on
Weekend Preview – Alabama-Huntsville →

Thank goodness for good friends this weekend. Taking in a game at Yost Ice Arena was something every NCAA Hockey Fan should experience.  The loudest arena in the country, hosting an important series at the end of the season where every point matters. I won’t say that Miami made it easy for the Michigan faithful, but they didn’t seem to make it hard to cheer, and jeer, this weekend.

All I can say about Friday is: momentum. After the first goal came less than 2 minutes into the game, the ice was tilted in Michigan’s favor for the rest of the period and Miami couldn’t recover. As mentioned in the Saturday #SixPack, Miami has allowed 10 goals within 3 minutes of scoring this season, having allowed one 4 times within 1 minute of the most recent Miami tally.  The 4th Michigan goal on Friday night was a dagger that killed the momentum Miami had gained. After the first period that saw 3 Michigan goals, 2 of the power play variety, Miami had outshot Michigan 11-1 in the second period, and had just scored to bring the game to 3-1.  The reply goal in this case was the straw that broke the camel’s back and Miami never recovered and went down 4-1.

I’ve uploaded several pictures for your perusal. Head over to our Facebook page for the full album. Don’t miss the end of the album to enjoy the “many faces of Rico Blasi” portion. Coach Blasi was  absolutely incensed with the officials in the third period of Saturdays game after a weekend of inconsistency and unbelievable calls.  The following pretty much sums it up. Thanks to these  crazily dressed Wolverine fans for the picture opportunity: 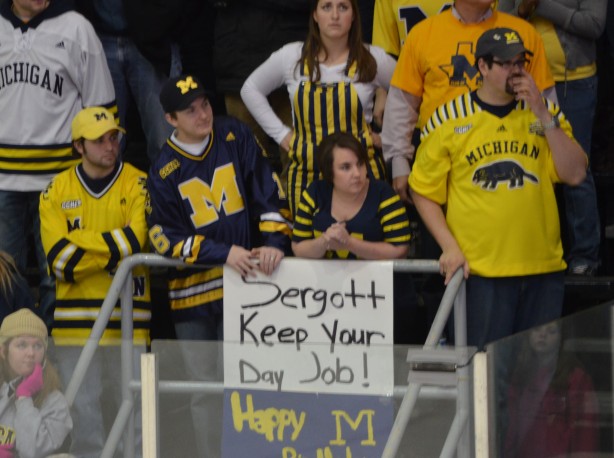 In addition to a number of offsides calls that were just too close to blow a whistle, the weekend’s referees missed several blatant slashes and blows to the head from each side of the ice.  Keith Sergott and Brian Hill had actually been pulled after 1 game of a series earlier this season, after some say he mis-managed the first game of the Western Michigan against Notre Dame series on January 13-14. With such a budding, yet heated rivalry between Miami and Michigan, it’s a mystery why Sergott and Hill were even in charge of this series less than a month after such an incident.

There are two things you’ll notice after the 2:00 minute mark of the highlight video posted above. First of all, take a look at the goal/no-goal that Rico was rather furious about.  From just about every vantage point I’ve seen – on the replays in the arena (I’m amazed the arena staff kept replaying it on the video boards) and afterwards on the DVR – the puck doesn’t appear to cross the line.

A goal is scored when the puck, … passes between the goal posts, entering from the front and below the top of the net, and completely crosses the goal line …

I can’t find any reason referees Brian Hill and Keith Sergott should have overturned the call. It hurts to say that. The goal would have pulled Miami to 2-1 in a heated 3rd period that featured 76 penalty minutes total.  Despite the blatant inconsistency, I believe that they got this one right, and that video replay was inconclusive in showing whether the ENTIRE puck made it the ENTIRE way past the goal line.  Coach Blasi did say to the media afterwards: “When 6000 people go ‘uhhhhhh’ it’s a pretty good chance that the home team knows that it’s a goal. The explanation was that from [Brian Hill’s] view, it wasn’t a goal. So, we’ve got to accept that and move on.”

On the other hand, if you had watched the game on CBS College Sports this weekend, the overhead replay was not available on the play, and it was NOT due to the broadcast not having rights to this camera. As to why, we can only speculate at this time. I was sitting directly behind the penalty box area several rows up, and never did we see the requisite overhead view on the monitor with our limited view.  In an arena with something like THIS hanging from the rafters, you’d think they would have a working overhead replay camera that is 1. required by the CCHA, and 2. actually functions.  In this case Michigan will have to pay a fine, and get away with highway robbery on what could have made a tough weekend for Miami one that was more easily swallowed.

The second item to look for is immediately following Chris Brown’s undressing of the usually steady Will Weber to score the 3rd Michigan goal of the night. Brown pulls a Tebow on the ice as he skates in front of where the Miami parents were sitting for the game. If you saw this action with 1 minute left in the game (please watch your volume here – slightly NSFW), you now can see why Weber had good reason to drop the gloves.

With just 1 minute left in the weekend’s play, Michigan freshman Alex Guptill slashed Connor Knapp well after the puck was buried and play had been whistled dead. This was not the first time this had happened on the weekend, and Weber made it known that it would not be tolerated with a solid crosscheck to Guptill to clear the crease area. Guptill didn’t like it, appeared to hit Weber in the helmet with his stick, and followed that foul up with a blatant spear to Weber’s midsection.  The aforementioned Brown skated in and laid a Tyson-esque right hook to Webers head, followed by a facemasking penalty that would carry a 5-minute major and game misconduct in any other situation.  Weber stood his ground, and after the dust settled, both had been sent off for fighting majors and game disqualifications.

In my eyes, Weber, who had been through an awful weekend of play, not to mention endless jeers from the relentless Michigan students, had every right to protect his goaltender. (In return, as you see in the video, Connor Knapp comes to ensure that Brown got what was coming to him at the hands of Weber after a game full of chippy-ness from both sides.) Weber and Brown face 1-game suspensions due to the Game Disqualification penalties they received to go along with their fighting majors.  While a Miami blueline without Will Weber is certainly going to take some adjustments and younger players to step up, Miami takes on Alabama-Huntsville in non-conference play next weekend. Michigan will face the Spartans of Michigan State, and missing their leading scorer will certainly be a tough pill to swallow in perhaps the CCHA’s only more heated rivalry besides the Miami/Michigan one.

Other Notes (forewarning – these aren’t fun):

More importantly, Miami’s two losses catapulted Michigan to the #2 spot in the PairWise Rankings, and dropped Miami to 18th. With 2 non-conference games, 4 CCHA games, and the CCHA Tournament looming, Miami seems to be on the outside looking in at the NCAA tournament at this point.

We’ll have your preview later in the week as the RedHawks return to action Friday night at 7:05 and Saturday at 7:35 against the University of Alabama-Huntsville. Both games will be televised on ONN across Ohio.

← Rough weekend, but the #SixPack lives on
Weekend Preview – Alabama-Huntsville →