Miami looks to strengthen its grip on home ice and a NCAA tournament berth this weekend vs. UMD.

Starting with this weekend, things are about to get real for the 6th ranked Miami RedHawks over the course of the regular season’s final three weekends.

The series over Halloween weekend was a fright-fest for special teams.

Blake Coleman had three goals that weekend (including a penalty shot tally) and was clearly the best player on the ice. He’ll have to be again if Miami is to get a win or two this weekend.

Offensively, the Bulldogs are led by forwards Alex Iafallo (7-16-23) and Dominic Toninato (14-8-22). While not as dynamic as Miami’s top forwards, they get the job done. Both UMD and Miami have four players with 21 points or more, but Miami can run out more top end goal scorers. UMD has just one player with 10 or more goals (Toninato) while Miami has four who have notched at least 10 showing the scoring depth the RedHawks possess.

Defensive, UMD is a rugged group led by hard-hitting Carson Soucy and Andy Wellinski who adds a scoring touch from the blueline with seven goals on the year. In net, freshman Kasimir Kaskisuo has played 83% of the minutes in the blue paint compiling a 15-9-1 record with a solid 2.31 and .911 slash line.

For Miami, I’d expect both Crash Cousins to be in the lineup to counter UMD’s physicality and I suspect we’ll see Jay Williams tonight for certain. Because he played both games in Colorado Springs last weekend, it’s reasonable to believe Miami head coach Enrico Blasi has selected Williams as the #1 ‘tender for the reminder of the season. Unless Williams plays poorly or is injured, I’m willing to bet he’ll be in there on Saturday as well.

This will be the just the sixth and seventh all-time meetings between the schools (UMD leads 3-2). Expect a low scoring weekend with Miami netting just five goals last weekend at Colorado College and the defensive responsibility with which UMD plays. If Miami could make the weekend an up-and-down track meet, it would favor the RedHawks with their team speed and skill up front.

As with many of these high-profile NCHC weekends this year, I’ll pick a split.

#1 North Dakota at Western Michigan – The Broncos can help Miami with a victory or two this weekend over the nation’s top ranked team.

#5 Omaha at St. Cloud State – Ditto for the Huskies. Wins over the Mavericks will help Miami’s cause in the NCHC standings.

#9 Denver at/vs. Colorado College – The Front Range rivals conclude the season’s battle for the Gold Pan with a home-and-home. Should the Tigers find a way to get a win in this rivalry series, it would help Miami dramatically in their effort to secure home ice in the NCHC playoffs.

From the League Office

Omaha sophomore forward Austin Ortega scored his 10th game-winning goal of the season last Saturday, which leads the NCAA and ties the NCAA single-season record, last set in 2002 by New Hampshire’s Colin Hemingway. Ortega is one of eight players to tally 10 game-winners in a season. Miami junior forward Sean Kuraly is second 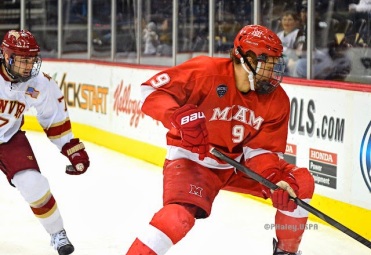 in the country with nine game-winners this season, just one away from tying the record also.