The jewel of the west, Denver, awaits #5 Miami this weekend.

Fresh off a thrilling come-from-behind victory on Saturday night to gain a valuable series split against Minnesota-Duluth, fifth-ranked Miami heads west for their final road trip of the 2014-15 regular season to take on #7 Denver at Magness Arena.

This will be the third and fourth meetings of the season between the two rivals after splitting a series in Oxford just a month ago. That series saw Miami (19-10-1, 12-7-1-1 2nd NCHC) play both Jay Williams and Ryan McKay with Williams getting out-dueled by Denver (18-10-2, 11-8-1-1 t3rd NCHC) freshman netminder Tanner Jaillet when he surrendered just two goals before Miami picked up a dominating 4-1 victory on in front of McKay on Saturday night. These will be the 16th and 17th all-time meetings (8-7 DU) and the 8th and 9th in just the past two seasons as the teams played five times last year including the NCHC championship game where the Pioneers defeated the RedHawks to advance to the NCAA tournament.

interesting because only one defenseman in the last 10 years has won a conference scoring title — Torey Krug at Michigan State in 2011-12 (he actually shared the title with Michigan’s T.J. Tynan). Notable is that Denver senior forward Zac Larraza (11-7-18) is suspended for Friday night’s game due to an illegal hit delivered in the Pioneers sweep of Colorado College last weekend. Larraza notched 1-1-2 in the series last month so his absence could be beneficial to the RedHawks. He will be eligible to return to the lineup on Saturday night.

Last weekend, Miami gutted out a split of their series against UMD dropping Friday night’s game 3-1 and climbing out of another 3-1 hole to win 4-3 in overtime on Blake Coleman’s 12th goal of the season on a pretty 2-on-1 feed from sophomore Anthony Louis. The two of them also finished a rush on Friday that netted the team’s only goal. Overall, Miami is still looking inconsistent offensively as they’ve now tallied 3, 2, 1 and 4 goals over their past four games despite playing two of those against the league’s worst in Colorado College. Friday night was so bad, at least in head coach Rico Blasi’s estimation, that he benched Conor Lemirande, Chris Joyaux, and yes, Riley Barber for Saturday’s finale. Sooner or later Barber is going to have to determine if he wants to be a competitor. For as much as I praised him for his efforts two Friday’s ago at Colorado College, that’s been the exception. He just doesn’t look like he cares all the time, which is too bad because guys like Czarnik, Coleman and Murphy deserve better in their senior seasons to say nothing of guys like Dornbrock, Paulides and Kuraly who consistently give a full 60-minute effort each night. Hopefully the message has been received and we’ll see a rejuvenated and committed Barber down the stretch. If he plays to his talent, Miami could be in for a terrific run in March and April. 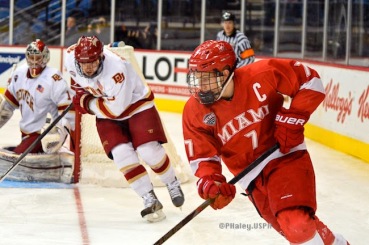 Senior captain Austin Czarnik continues to lead the RedHawks on the ice and in the scorebook.

Senior captain Austin Czarnik continues to pace Miami with 2-28-30 and leads all active players in career points (154 — tied with Minnesota’s Kyle Rau). Czarnik is trailed on the Miami team by Barber (13-14-27), Louis (6-18-24), Coleman (12-12-24) and Sean Kuraly (15-6-21) who leads the squad in goals. Defensively, Miami has been fairly strong and has gotten respectable goaltending from Williams, and on Saturday, McKay. I suspect we’ll see Williams on Friday and Blasi will take it from there pending the outcome and his play. I’d also like to see more Colin Sullivan now that’s he’s recovered from an injury that cost him most of the first half of the season. Getting an opportunity last Saturday, he looked smooth and fleet of foot — something Miami can use more of against the top tier teams they’ll face from this point forward.

This is a huge weekend for both teams as just three points separates the two teams. NCHC seeding. PairWise implications. Playoff home ice…a lot on the line! And, as with two weekends ago in Colorado Springs, Miami will be battling the dry, snowy altitude here in Colorado and will have to dig deep to compete for 120 minutes. It was no secret that Miami looked gassed at 6,000 feet on the big ice late in the game Saturday night at Colorado College. It’s encouraging however that they were just here and their bodies should be more acclimated to the altitude and they’ll also get to skate on a regulation ice surface this time out. As with most of these elite league series, I’ll call a split but Miami will have to work hard on the road to get it.

The Blog of Brotherhood will be in attendance for both games, but we’ll be a fan in the stands this weekend. We’ll do our best to keep you updated via Twitter but you can catch both games at MURedHawks.com with Drew Davis at the mic, not Greg Waddell. A rare conflict in schedules will prohibit Waddell from traveling west with the team this weekend. The games can be heard over the airwaves on both WMOH (1450 AM) and WKBV (1490 AM) this weekend. Friday’s game will be covered by Root Sports (DirecTV Ch. 683 & 684; Dish Ch. 414 & 5414). Saturday’s game will be streamed on NCHC.tv. (source: MURedHawks.com)