The RedHawks got blown out, then gave up the tying goal in the closing minutes and the winner in overtime last weekend. Friday it was a mid-third period goal against that ultimately induced a tie, and Saturday another overtime winner allowed in a 3-2 loss to Nebraska-Omaha at Cady Arena.

Quick thoughts and observations on the finale and then we’ll look ahead, since the can’t-close-out-wins angle has been beaten to death, both on the ice and in writing here.

– One has to feel back for sophomore defenseman Scott Dornbrock, who played so well all weekend before the somewhat unlucky decisive goal in OT went in after he couldn’t hold the puck in the zone and got beaten the outside. Whether he should’ve played that more conservatively or not, he didn’t deserve that fate to end the weekend.

– Once again, Miami looked solid overall but didn’t do enough to win. The problem on this night was finishing, which has been a recurring problem. Sometimes the puck just won’t find the net, but when it happens on many nights it makes one question the team’s shooting accuracy.

– Preface by saying UNO found a way to earn the tie Friday and the win Saturday, the following is in no way a sour grapes commentary, but the officiating was flat-out brutal this weekend, especially the finale. Sean Kuraly was assessed a boarding major that resulted in the second Mavericks goal, and no one in the building thought it warranted five minutes. The linesman actually made that call, which neither referee saw or thought was worthy of a penalty, which makes that even tougher to stomach. Defenseman Louie Belpedio was assessed a tripping penalty for a legal check, and many obvious called against both teams were missed while other non-calls were whistled. And let’s not get Josh Melnick getting called for breathing on a player in the first minute of overtime. Most fans thought we had seen the last of Brian Aaron when the CCHA folded, but there he was in Oxford this weekend, blowing call after call again.

– On a more positive note, Anthony Louis and Kiefer Sherwood scored the RedHawks’ goals and are starting to pile up points. Louis always seems to start slowly before lighting up the scoresheet the second half of the season, and Sherwood’s 2014-15 USHL campaign indicates good things are ahead for the freshman, who is getting better every game and is becoming an exciting player to watch. Seeing players improve is one of the biggest thrills of watching a college hockey team regularly, and his evolution is fun to witness.

Now a look at where Miami goes from here. Physically, the RedHawks go to Colorado College, which is 0-12, for a two-game series in two weeks.

The term ‘must-win games’ is way overused, and that’s not really the case here, but a sweep of those contests and the resulting six points would be extremely helpful in getting the team back on track. Anything less and Miami will head into 2016 below .500 and likely in the bottom half of the NCHC standings with every other league team having games in hand over the RedHawks.

The latter part of the last sentence is important: Miami has logged eight league games. Everyone else has played six except Denver, which has just four in the books. Tied for fifth with 8 of 24 possible points is bad enough, and now the RedHawks will play CC in two weeks then just two more NCHC games until Jan. 22.

Some context: Last season it took 41 points to earn home-ice advantage for the NCHC Tournament and 50 to win the Penrose – the No. 1 seed and a home date with Colorado College in the first round.

Miami has eight points in eight games and would need 33 more to reach the 2014-15 threshold for home-ice. That’s 11-5 or the equivalent in tie/3-on-3/shootout points against a murderer’s row conference schedule.

To reach 50 it would take a 14-2 finish. Not happening. And that’s a knock on Miami, more of a statement about how tough it is to almost run the table in this league, even for a top-five team, which the RedHawks are not at this point.

The good news: The toughest series are over. No more North Dakota and Miami already played at St. Cloud State. SCSU does come to Oxford, and the RedHawks go to UNO in late January, but the other NCHC games remaining for MU are two at home vs. Denver, two at Western Michigan and four each vs. Colorado College and a Minnesota-Duluth team that is 5-5-3 with a losing NCHC record.

FORWARDS: C. Thirty-two shots overall – 25 by this group – is pretty good, especially considering Miami was shorthanded for over 14 minutes, but the finishing thing has become a major concern. The goals were both great, and overall this corps played well defensively, but it’s really time to start scoring goals. Louis became the third Miami forward to score his third goal this season in this game, and we’re 14 games into the season.

DEFENSEMEN: B. Miami held UNO to 25 shots, and the first two goals were not at all on this group. Another workmanlike effort from the D-corps.

GOALTENDING: C+. It was sort of a similar game to Friday for Ryan McKay – one bad goal (the first one, off a huge rebound) and a solid showing otherwise against not a lot of high-percentage shots. It was another contest in which he certainly didn’t lose the game for Miami, but he didn’t win it either. 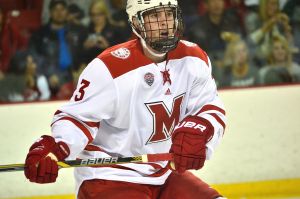 LINEUP CHANGES: It was the same 19 as Friday. Forward Zach LaValle was still out of the lineup with a presumed upper-body injured, forward Michael Mooney was scratched, and defenseman Colin Sullivan sat again. Two thoughts: 1) Can Sullivan play forward? He’s super experienced at the college level, and let’s face it: After the top two lines there’s not much offensive contribution anyway (someone else credible mentioned the possibility this weekend). With seven talented defensemen, it’s tough to decide who sits each night, but you hate to see someone who would be in the lineup every night for 80 percent of NCAA team benched for long stretches. And 2) the smart money is on Jay Williams seeing a game in net in two weeks since McKay seems to play better when he doesn’t play numerous consecutive games and the games in two weeks will be at a high altitude.