The RedHawks lost their second overtime game in eight days as they fell, 3-2 to Nebraska-Omaha at Cady Arena on Saturday.

Miami also settled for a tie on Friday despite leading the first half of the third period.

The loss snapped the RedHawks’ five-game unbeaten streak and sent them to a season-worst two games below .500.

Miami never led in the series finale, and the Mavericks jumped on the board just eight-plus minutes into the game. A David Pope rip from the top of the left faceoff circle was stopped by RedHawks senior goalie Ryan McKay, but the rebound came to the opposite side, and Austin Ortega slammed it home.

After a major penalty was assessed to Miami senior center Sean Kuraly, Brian Cooper intercepted a clearing attempt by senior forward Kevin Morris and banged it home 3:51 into the middle frame, making it 2-0.

The RedHawks battled back with a pair of late goals in the second period to tie it. 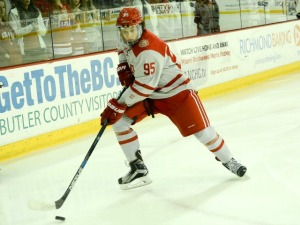 Junior center Anthony Louis backhanded one top shelf from the slot with 3:42 left in that stanza, and freshman forward Kiefer Sherwood ripped a shot just under the crossbar with 43 seconds left to even it heading into the second intermission.

But after a bouncing puck eluded Miami sophomore defenseman Scott Dornbrock at the blue line, UNO’s Tyler Vesel skated around Dornbrock and fed Jake Rudolph for the game winner with 1:46 left in overtime.

The RedHawks are now 0-2 in the extra session this season.

Louis finished with a goal – his third in five games and his second in of the weekend – and an assist, giving him seven points in six games (3-4-7). Sherwood ended the weekend with a goal and two helpers, both of which came on Friday.

UNO spent over 14 minutes on the power play, compared to seven for Miami.

The RedHawks are now tied with Minnesota-Duluth for fifth place in the NCHC with eight points, and Miami has played more league games than any team in the conference (8).

This was the final home game of the calendar year for Miami, which is off next weekend and wraps up its 2015 schedule with a pair of games at Colorado College on Dec. 4-5.