On Saturday, the RedHawks equaled that mark in the 13th game of this campaign, skating to their second straight draw, 2-2 at No. 1 Denver on Friday.

And for the second straight night, the Pioneers (7-2-3) secured the extra league point by winning the sudden-death shootout after the teams remained even after 70 minutes.

After Miami’s Conor Lemirande was assessed an interference major in the first minite, Dylan Gambrell took a cross-ice pass from Troy Terry that hit the skate of the RedHawks’ Gordie Green, skated to the center of the faceoff circle and whipped a wrister over the glove of goalie Ryan Larkin 3:02 into the game. 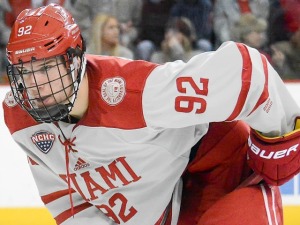 Miami pulled even at the 3:28 mark of the second period when Grant Hutton’s shot from the blue line was stopped by Tanner Jaillet, but the goaltender allowed a huge rebound that Willie Knierim batted in for his first collegiate goal.

With 5:57 left in that frame, Terry emerged from the corner with the puck, skated laterally into the slot, turned and fired one just under the crossbar to give Denver a 2-1 lead.

But the RedHawks (3-6-4) again pulled even with 4:09 left in regulation on another rebound, as Kiefer Sherwood backhanded one that Jaillet knocked aside, but Ryan Siroky was skating by and deposited it into the net. 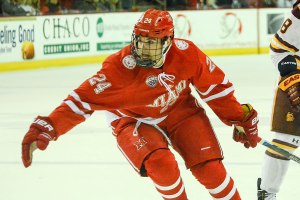 It was Siroky’s first goal of the season as well.

Louis picked up an assist for the fourth straight game, giving him 103 career points.

Larkin turned 38 shots aside on Friday to set a career high but blew that away in this game, turning 49 aside. He finished the weekend 87 of 90 and made 14 more stops in the unofficial double overtimes both nights.

Miami – now winless in its last seven – picked up its second points of the season in NCHC play but remains in last place in the league, one point behind Colorado College.

The RedHawks are off this week and head to Cornell for a two-game set on Dec. 2-3.