Just when it seemed like Miami had pulled off a surprise by tying No. 1 Denver once on its home ice at elevation, the RedHawks did it again a night later.

MU and the Pioneers skated to a 2-2 tie in a series that Miami entered as a huge underdog, having lost its previous five.

Like Friday, the RedHawks were severely outshot, 51-26 including 22-3 in the first period (that’s a 37-6 first-period shot advantage for DU on the weekend).

As we’re constantly reminded, especially with a young team, the season is a process, and hanging with the top team in NCAA for six period in a hostile rink a mile above sea level will do wonders for Miami’s confidence.

And let’s face it, that confidence couldn’t have been in a great place after a pair of demoralizing losses at home to UNO last weekend.

At the same time, confidence builder or not, the RedHawks (3-6-4) are still winless in league play with two of a possible 18 points a quarter of a way through their NCHC schedule. They have three wins in 13 games and haven’t picked up a victory in November, with their last coming on Oct. 28.

Youth breeds inconsistency, something we’ve been reminded of often the first two months of this season, and while it can be incredibly frustrating, weekends like this show that at least Miami appears headed in the right direction overall.

– You know what is consistent for Miami? Ryan Larkin. He posted a .963 save percentage this weekend, making 87 saves on 90 shots. The RedHawks have certainly had rough patches this season, but imagine if Larkin wasn’t between the pipes.

– Willie Knierim hasn’t looked completely confident at times this season, but hopefully his rebound goal will springboard his overall game. After the puck hit goalie Tanner Jaillet, it popped into the air and Knierim banged it home before it hit the ice. It was a goal-scorer’s goal and from in close, and area the wide-body could have a lot of collegiate success as he adapts to this level.

– With injuries and such plaguing a Miami team that was never terribly deep, Colin Sullivan played forward on Friday and shifted back to defense on Saturday. Coach Enrico Blasi loves guys he can play anywhere, and Sullivan can do just that, plus the fifth-year senior provides experience on a team lacking in that department. Defenseman Bryce Hatten sat out on Saturday after playing Friday, and forward Alex Alger returned to the lineup sheet.

– The upcoming off weekend is bittersweet, as Miami would probably like to capitalize on the momentum it built this weekend, but at the same time it can certainly use another week to heal. Louie Belpedio should be ready and will fortify the blueline substantially, and Carson Meyer may be ready to go as well. 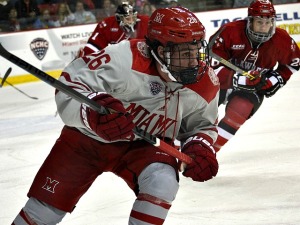 – Justin Greenberg has really stepped up not only on the PK but in the faceoff circle. He was 11-5 on draws Saturday and 20-10 for the weekend.